I have an odd relationship with Space.NK.  I love their product ranges, I think the shops are lovely, and they’re basically places I should want to spend a lot of time in … so, why do I so very often find the experience so very frustrating?

Example: last week at the Cheapside branch, I had been greeted five times, and asked if I wanted help six times before I’d even got past the first display counter, a couple of times by people actually standing next to each other.  I’d actually gone in for something specific, so politely declined offers of advice, and made my way to the Lipstick Queen stand.  Then of course, because that display is in the furthest, darkest corner of the store, by the time I’d swatched and made my selection the staff were all happily ensconced in applying lipgloss (straight from the testers  – squick!) to themselves, and gossiping about shoes at the front of the shop.  Was anyone interested in taking my money?  It didn’t appear so.  It wasn’t very busy in there, so I guess they were bored, but after saying excuse me a few times, and being totally ignored,  I walked out.

It’s not been an isolated incident, either.  I’m no supermodel,  I’m not hip and trendy, and I’m quite obviously not a yummy mummy with cash to burn, but that’s no reason for a shop assistant to write me off. I know my cosmetics. What’s more, I spend a lot of money on them, and further, I’m a personal shopper who knows lots of other people who want to spend their money on beauty products … Because I may not look like a particular demographic doesn’t mean I should be treated like crap in a shop.  Any shop.

On the other hand, I’ve had wonderful service from them in some stores (I’m thinking Kensington and Covent Garden in particular) and I’ve even been offered jobs with them!  It’s just such a lottery as to whether you’re going to get the bored, sulky, snobby staff, or the knowledgeable and welcoming members of the team.

With that in mind, it was with hugely mixed feelings that I popped along to the InStyle Space.NK  shopping event last night.  But, on the whole, I enjoyed it a great deal.  Granted, it could have been better organised – could have been a LOT better organised – but the lashings of champagne kind of made up for that.  I had a wonderful mini-facial using Essential Herbology products (which I’m definitely going to be researching further in the future!), but I was a bit aggravated that the lack of organisation meant that not everyone – including myself – got to have a makeover, if they wanted one.

We got goodie bags: 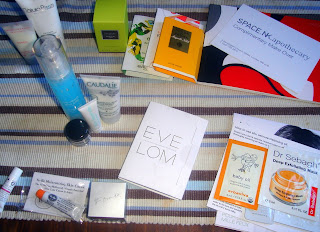 Which were nice, but I’m having a hard time seeing how it’s £95 worth of products!  Four cleansers, three moisturisers (would have been nice to have more, I’m in the market for a new moisturiser at the moment) four perfumes, a pack of cleansing wipes, a muslin cloth, and a lot of sachets.

I did succumb, and buy an By Terry eyeshadow, Black Grape (£21.53) as it’s a gorgous colour in the pot.  Not entirely sure it works quite the same on the eye, what do you think? 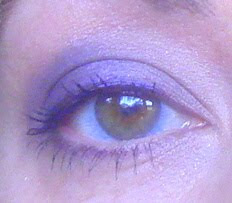