Even though I use cleansing oils to remove my makeup, it seems I’m still collecting eyemakeup removers at a rate of knots for some reason!  This isn’t entirely a bad thing, as I do love me my full on lashes and liner, even with a “natural” look, and sometimes, you just want those bad-boys OFF!

If you’ve ever read my Products I Simply Can’t Live Without post, you’ll know that I swear by Chanel’s Bi-Phase remover, but I wanted to put it to the test, is it really the best, or is it something I’m just so used to using that I only think it’s good?  So, I’m setting up an eyemake up remover challenge over the next couple of weeks – cheap and cheerfuls first, then high-end removers, then I’ll pit the winner of each of those categories against each other in a final showdown.  I’ll wear the same makeup in each week so that it’s fair … 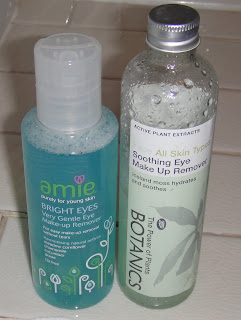 First thoughts are that the Amie has a cute little push button top to control how much you get out of the bottle, and the Botanics bottle has a stupid little screw-top and no flow control, so I ended up spilling the stuff all over the counter.  Botanics is a bi-phase remover meaning you have to give it a damn good shake before using (which makes it look rather unpleasantly globular), whereas the Amie is just a clear blue liquid that doesn’t need shaking.  There’s no scent whatsoever in the Botanics, but the Amie smells quite “perfume-y”.

I always apply makeup remover to a cotton wool pad, then hold it over my eye for about thirty seconds, to allow the remover to dissolve the products a little.  Here’s how the pads looked after: 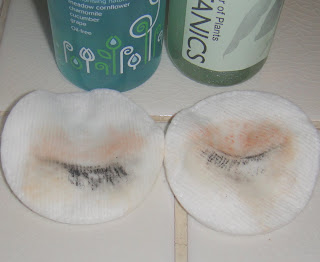 You can see, the Amie has definitely got to work on that mascara a lot quicker than the Botanics. (the order of the products is reversed on my face, so I’ve added labels to make it easier to see which is which)

Once the remover has had a chance to melt the makeup off my eyes, I then use the pad to – very gently – remove the rest of my makeup. here’s how everything looked at the end: 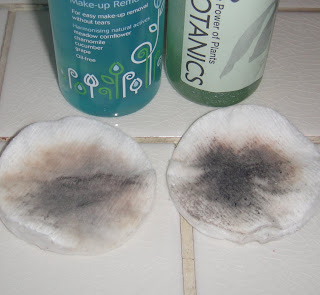 Thoughts at this point are that the Botanicals remover is very oily and has left my eye with a greasy, soapy feeling that will have to be rinsed off.  The Amie has removed my make up nicely, and not left me with a greasy afterfeel (it’s actually oil-free), so it’s at this point, that I would ordinarily declare Amie the winner.

Amie stings.  It really stings! It’s not meant to sting.  They mention how gentle it is on the packaging about three or four times! Now, I have stupendously sensitive eyes and practically every eye product on the market stings my eyes at some point (cosmetics don’t for some reason), but the Botanics doesn’t sting me at all.  I have someone else using the Amie at the moment, most likely it won’t be sting-y at all, it’s just an odd quirk of my skin, but I’ll mention their findings. Now, I’m torn, Amie’s the better product, but Botanicals isn’t painful.  What to do?  Can’t fail both products in the first round!

This picture actually decided it for me: 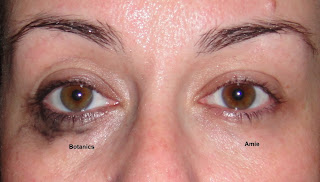 I had a shower after removing my eyemakeup, and this is what looked at me in the mirror when I got out.  The Amie had completely removed my makeup, whereas the Botanicals had left a residue of mascara, and that’s not good.  In fact, it’s completely the opposite of good.  Don’t care that you don’t hurt at this point, removing make up is what a makeup remover is meant to do, and frankly, this isn’t good enough.

Boots Botanics currently costs £1.93 on Boots.com, and you can buy Amie from Superdrug at £4,95. The Botanics is my own purchase, but the Amie was provided for review purposes.

Next week, Chanel vs Talika.