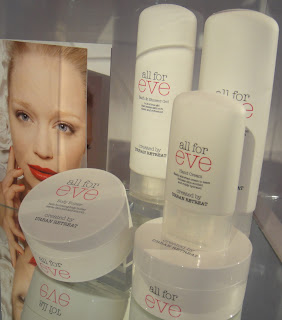 I was very proud to be invited as a guest blogger to the official launch of the All For Eve range on Monday night. Held in the heart of Marylebone, this has to be the glitziest thing I’ve done on a Monday since, well, let’s face it, since forever.

Before I start to talk about the evening I spent though, I just want to quote a sobering statistic I picked up whilst reading the press pack on the way home:

“Ovarian cancer takes the lives of 72% of sufferers every year, a figure that has not changed since 1972. Every day 20 women will die from a gynaecological cancer in the UK alone.”

I don’t know about you, but this fact shocked me, especially when you consider that the 5yr survival rate for breast cancer stands at 80%. I simply cannot believe that the survival rates haven’t changed in nearly 40 years! This shocked and appalled me, and it brought home to me why All For Eve actually exists.

The brand has had, so far, a very short history, the initial idea came into being in November 2009, and it’s already on the shelves in Harrods, and will shortly be available in Harvey Nichols, Selfridges, Fenwicks, Fortnum & Mason, and the top 50 Boots in the country. It’s starting with beauty products, AFE is planning  to expand the initial offering – currently comprising body products, a lipstick and nail polish, alongside a Swarovski crystal nail file – into some currently shrouded in mystery other areas – I’m thinking fashion though! Other brands lined up to join the All for Eve umbrella later this year include Elemis, Alpha H and Emma Hardie amongst others, which is a very interesting line up, and I, for one, can’t wait to see what other areas the brand expands into. It’s already won 4 CEW awards, and that’s a record in the British beauty industry. 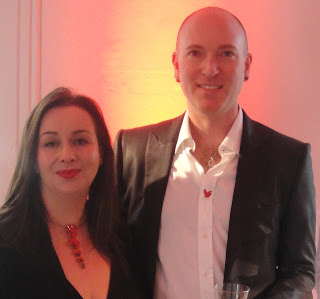 I had a brief chat with Sophy Robson, creator of the nailpolish, and we had a bit of a giggle about my twitter habit! But most definitely the high-point of my evening was speaking to Daniel Sandler, creator of the brand’s iconic lipstick (which I am, of course, wearing in the pic at right, alongside it’s creator!), about how he got involved with the company, and how he went about creating such a great lip colour.  He told me all about the perfect red lipstick he discovered as a teenager (a Lancome shade, but I forget the name, but you bet I’ll be speaking to the Lancome office to see if I can track it down soon!), and wanted to come close as possible to that shade within the budgetary constraints inherent within producing a product for charity.  Personally, I think he’s done an amazing job, and wasn’t backward in saying so, I think it’s a great lipstick (and I’ve seen some dreadful ones recently), and it’s definitely on my list of classics.

As for why Daniel got involved, something I didn’t know was that he was the man responsible for making Jade Goody look so amazing on her wedding day – say and/or think what you will about Jade, you can’t deny that for an end-stage terminal cancer patient, she literally glowed  as a bride, and she single-handedly did more to publicise gynaecological cancer than any woman has in a very, very long time – and she did a lot to inspire him.  He pointed out that there are a lot of people have been affected by cancer, and he’s very happy and privileged to find himself now in a position to be able to actually do something. Daniel is an exceptionally nice man, and very easy to talk to – sadly, I think I may have talked his ear off a little bit, if you read this Daniel, I’m very sorry! – and when he found out my mother works in a hospice with cancer patients, he immediately offered some help with fundraising efforts.  I have to admit I was very touched by this, and I’ll be getting in touch with the hospice soon to see if there is anything they need.

In the meantime, if there’s something you want to do, then make a start and buy a product from All for Eve.  Those survival rates have to change.