Two thousand.  At the end of the 80’s, that’s how many perms that were processed by Andrew Collinge’s salons every single week. When I point out that all the salons are based in (and around) Liverpool, you might understand why that particular little statistic brought a smile to my face when I heard it the other day.

I grew up in, and lived in, the north west up until around five years ago. When I was younger, (before the likes of Toni & Guy showed up), you had a choice in hairdressing, you either went to one of the local blue-rinse brigade of salons – usually called something like Bab’s or Curl Up and Dye – or, you saved your pennies and went to an Andrew Collinge salon, usually in either Chester or Liverpool.  Having long been a hair snob, I usually saved up, and went “fancy”. I must have been to at least half of the 8 salons in the chain, over the years as well as spent quite a few hours in the graduate academy, sitting as a model for the trainees who were learning blow-drying!

I learned a lot about hair from those salons, how to do an easy zig-zag parting, about styling products, that blonde highlights are not my friend, that a “restyle” rather than a trim will cost you an extra tenner at the till, and that salon products are usually better – but not always – for your hair than Vosene.  In fact, the first ever “designer” hair product I bought was Andrew Collinge’s Design and Shine.  Lo! An expensive hair habit was borne … 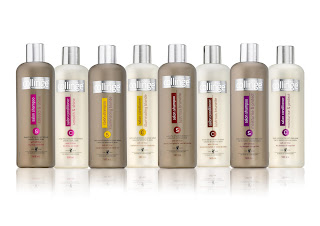 So it was that I was beyond delighted to be invited to Andrew’s house (along with some other lovely bloggers!) to have a chat with the great man himself recently.  Amongst some interesting snippets of gossip which I’m not at liberty to repeat here, Andrew gave us some great tips and hints about haircare, some of which I’ll repeat here:

Hair needs to be nurtured, treat it gently!  A cool rinse will work wonders for shine and condition.
Hair doesn’t need to be washed every day – every 2-3 days is optimum, he thinks, and I agree – in fact, washing every day can lead to your scalp becoming over-stimulated which will make greasy hair even greasier in the long run, as your scalp gets used to daily massage.
Semi-permanent colours work well on greying hair, used regularly, they can have a staining effect on the greys which will help them blend in better, whereas a permanent colour will just lead to a white-rooted “badger effect”.  Not sexy, if you ask me.

Andrew also very kindly demonstrated some simple hairstyling tricks for us – which was amusing as he only had one hair-brush and one hairpin to create most of them with!  Still, the fishtail plait he created was beautiful, and really simple, and the updos he did for everyone else were likewise.  I got a hint of backcombing, and some tricks about how to deal with my “mental” hair.  Andrew actually used the phrase “look at the little baby curls!” when I was showing him why updos just don’t work all that well for me.  Thanks, Andrew! 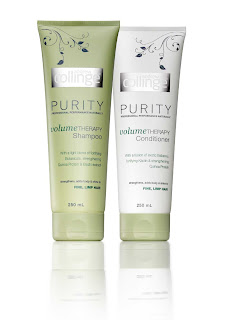 Andrew also reminded us that he still has a haircare range available in most supermarkets – you can have a look at it here at Superdrug – it’s recently been repackaged to celebrate the Collinge family’s 100th year in hairdressing, and, as I never feature a product without testing it first, I’ve been using it for the last couple of washes.  Now, I’ll be honest, I genuinely can’t remember the last time I bought shampoo in a supermarket, so this was a bit of a leap of faith for me. I tried the Smoothing range (pictured above) which is the same as is used in his salons, which promises smooth shiny hair without frizzies.  I’ve been amazed, my hair has never been so shiny, I was out with a few people yesterday, and I got lots of compliments, which almost never happens!

I’m not, however, a massive fan of the packaging, the bottles are big (500mls for £4.99), and can be tricky to handle with wet hands – a pump dispenser would be great, I’ll have to dig a couple up from somewhere – and the range does contain SLS, so I’ll have to alternate it with an SLS-free product to avoid the itchies, but this is some seriously good shampoo and conditioner right here, and at such a bargain price!  The range also includes A “Purity” collection alongside the salon range (pictured left) which features more natural products based around quinoa proteins which I’m looking forward to trying too.

Again, the products are available in most major supermarkets, and Superdrug sells it online, alongside the styling range, which still includes good old Design and Shine!

I just want to say a massive thanks to Andrew for being brave enough to invite a load of “nutters from the internet” (MY phrase, not his!) into his home, and for being such a gracious and charming host. Blogging has taken me to some wonderful, random, and unexpected places recently, but this has to be one of the most relaxed, and informative sessions I’ve been to!

Incidentally, the top picture in this post features me, circa 1990, modelling one of those very perms Andrew was referring to in the first paragraph …