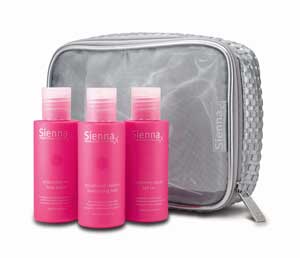 I had a fake tan recently.  Those of you who know me will know how funny this is, but truth be told, when you’re offered a tan by Sienna X – the people who are responsible for the tans on Strictly Come Dancing, then it’s actually pretty hard to turn down. Honestly!  Plus, I had a party to go to that weekend, so it seemed like a good idea at the time.

I’ll be honest.  I’ve never had a fake tan before, so it was with no little trepidation that I headed to a top-secret location in central London for my spray-down. Elaine, the person who carried out my tan (the lucky, lucky girl) instantly put me at my ease – to be honest, some of the backstage gossip from Strictly kind of helped, I have to admit – and I was all sprayed up and ready to get dressed again in just about six minutes.  Colour me deeply impressed!

On initial spraying the liquid smelled lovely and tropical, slightly coconutty, and not at all biscuit-ish.  There was just a hint of digestive overnight – it can’t be denied – but it wasn’t too dreadful.  once I’d showered off the guide colour, I was left a gorgeous pale-caramel shade (Elaine had promised me the “party tan”, which just makes you look like you’ve been away for a week or so), and I was exceptionally happy with the golden colour, which didn’t look at all orange.  Best of all, in the office the day after getting tanned, I was asked a few times if I’d actually been away!  On one occasion by someone who had actually seen me the previous day, which just goes to show how convincing the shade was.

So impressed was I (especially with my face, as the fake tan had completely covered up my red blotchiness, so I’m going to be more willing to try some facial tanners this coming year, I think), that I gave some of the products to a work colleague to try.  Here’s what Joanna had to say about the home-tanning products:

So it is well known fact amongst my friends that I should never be left alone with a bottle of fake tan.  I’ve tried them all, from the sprays to the graduals and ending up with even having slight problems applying after sun creams which contain just a smidgen of fake tan!

I have had to brave the outside world in a myriad of colours from Oompa Loompa orange to plain good old fashioned jaundice. I’ve been streak ridden, and had blotches and horrendous hair line mistakes, oh and not forgetting very strange coloured eyebrows on some occasions.

I had in general given up completely and resigned myself to the fact that I will be brown once a year when I return from my holidays, until that is I was very kindly given a set of the Sienna X tan.  Now, I was told by a certain someone who I have huge beauty faith in that this was a different kind of fake tan and the idea behind it is to make you sun kissed, not orange as some well known brands make you, and I am pleased to say it does exactly that.  It is amazing.

You exfoliate and put on the gradual tan 1 hour before bed so it can dry and the results are fantastic.  I looked like I had just had a two week holiday in the Caribbean!  The smell of fake tan is still there so I suggest you apply before bed.  Reapply the next day or day after and the results are pretty shocking I have to say.   The texture is pretty thick but it moisturises your skin beautifully and the exfoliator and radiance body moisturiser in the same range are an absolute must too.  I defy anyone to go wrong with this product.  Seriously……. I have found my perfect fake tan at last.

As for me, impressed as I was with my professional spray tan – and I was, very – I don’t think it’s something I’ll be doing on a regular basis, turns out I’m a bit more low-maintenance than I thought I was!

The Fine Print: Products were provided for review consideration, Sometimes you just have to try something different.  I don’t think I can take the smell of biscuits too often though …