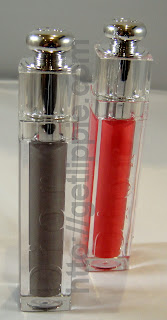 Alongside the palette I showed to you yesterday, Dior have also released two lipglosses to go alongside, one a cool silvery grey and one a light, cool, milky coral: 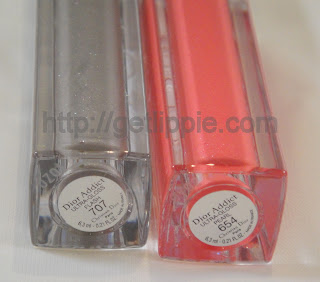 Flash 707 is the one that caught my eye back in December, and I was intrigued as to how it would work in person, but when I saw 654 Pearl, I felt duty-bound to pick that one up too, as it was so pretty in the flesh! 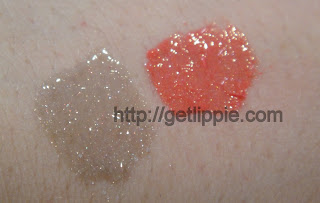 As you can see, 707 Flash swatches pretty sheerly, and 654 Pearl swatches far more opaquely, but both have a hint of blue and copper micro-shimmer running through them, as you can see here: 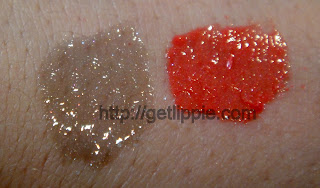 They’re both exceptionally pretty, but I have a feeling Flash will be a lot more useful as a layering gloss, than as a shade in its own right, I’m not entirely convinced grey lips are the way to go unless you’re serious about looking like you have consumption …

Both are typical Lip Addict glosses, lightly fruit scented, slightly sticky, not all that long lasting, but they don’t dry your lips out, and I, for one, am a fan of the slightly OTT packaging.

The Fine Print:  You can call these samples, if you wish.  I prefer to refer to them as “shopping”.