In what is increasingly looking like it’s going to be a recurring series (Yay!  No pressure), I present to you yet another post by Mr Lippie about … men’s stuff … 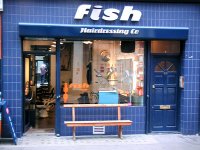 On my last post, I noticed PerilouslyPale saying that she was totally lost on “this Fish stuff” I mentioned in passing when describing my current routine. (Y’see, I DO read the comments people leave – I just have this bad habit of not responding.)

Well. I can’t be having this. Time for some education – to the Aquarium! Errm. Hang on. Mebbe not.

Fish  is a hair product brand, established in 1987 in Soho at the hairdressers’ of the same name. Now, I haven’t been there – although Get Lippie does occasionally point out I should try a fancier haircut place than the barber shop I’ve been going to for the past 3 years – but I have become somewhat of a gill-loving junkie.

As may have been mentioned, I have hair. Lots of it – not long flowing locks or anything fancy, just thick hair that is impervious to most weather systems and constantly on the verge of afro-dom unless it’s exposed to clippers every month. As a result, it needs containment – or to be at least pointed in the right direction – in case it decides to do its own thing and mug someone whilst I’m not looking.

So. I first noticed Fish products in Boots – I think I was in the middle of a conversation with Get Lippie and we already had an in-joke going regarding the term “Fish!” involving random hand-waggling (don’t ask, I can’t remember – I have the attention span of…what was I saying?), so it seemed just and right and proper to pick up some kingfisher hair cream – I think at the time I was using Brylcreem hair gel – which, whilst ok, tended to leave my hair a touch on the crispy side once it had dried out – possible over-application, looking back on it, but then, I was not the suave & sophisticate metrosexual I am now (allegedly).

Quite frankly, I loved it. It required only a slight amount in the morning and lasted all day without losing shape, I didn’t feel like it was going to crunch if someone touched my hair, and it had a pleasing smell that seemed fresh & generally un-chemical. A winner! Having found this, I had a bit of a wander through the range – mostly looking at the creams & putties, although I did try the jellyfish (gel) at one point (crispiness again – I’m now pretty much sworn off gel forever!). At the present time, I’m using Fishshape – which is a “Firm Hold Texturising Cream” – whilst I don’t need the texture, the Firm Hold is well appreciated.

It was at some stage whilst I was visiting Lippie Towers (prior to our moving into Lippie Underground HQ) that I discovered that Fish did other things aside from the focussed hair care range. I was looking to sort out a washbag for Lippie Towers instead of constantly raiding my bathroom in the glorious metropolis of The ‘Ding (that’s Reading for overseas/northern/people of unclear origin/anyone living more than 20 miles from the town), and my eyes focused on Sportsfish – a combined hair & body shower gel. Again, it had that fresh fragrance that I associated with the cream, it was one bottle, which worked great in terms of trying not to clutter up a bathroom of 3 girls even further, and it appeared to be relatively cheap! Into my wallet I delved, and another mark on my soul was made as I sunk deeper into the waters of the brand.

What next? Well. Whilst working in Reading, I was occasionally engaging in what could loosely be described as exercise – there was a gym near the office, and it actually had a swimming pool that was usable for doing lengths, which was a minor miracle in itself (I hate gyms – I find them a bit tedious & just unenjoyable – I know this sounds daft when you consider I like to do lengths for my exercise, but I learned to swim at a very early age & love it!). Again, time to compile a washbag – and look – Fish Soho do a deodorant – step forward dryfish!

You’d think that would be it, surely? Well. You’d be wrong. There is indeed more – this one fairly recent! Obviously, as I mentioned earlier, these days I’m a bit more sophisticated in what I utilise for my grooming regime, and have tended to at least look at new products with more than just a dismissive eye. I also tend to use both shampoo and a shower gel, as opposed to an all-in-one product. At the present time I’m hooked on L’Occitane BACVX as my shower gel – I really, really love the smell and how I feel after using it – but I discovered purefish – a 3-in-1 shampoo from Fish Soho that conditions the hair and acts to prevent a flaky scalp. It’s got the same predominant scent as the rest of the products, and I’m really enjoying using it – it really works well & I don’t require a huge amount to feel that my hair is actually clean – with some previous products I’ve had to go through 2 or 3 rinses just to feel that “washed” feeling.

So. There it is. Fish Soho have got their talons (if, indeed, fish have talons?) deep in my soul and I am doomed to be reincarnated as some form of aquatic life form. Which is ironic, given I hate eating fish. Having said that, I’m off to cook some crab linguine*. Try not to do anything daft while I’m gone, hmm?
The Fine Print: So.  Many.  Fish.  Puns.  Must. Not.  Do.  Fish.  Puns.