After featuring both the Guerlain Autumn and Winter collections recently, I got a few emails regarding the pink Rouge Gs from each, Madam Batifole and Provocative, so I thought comparing the two was a good idea: 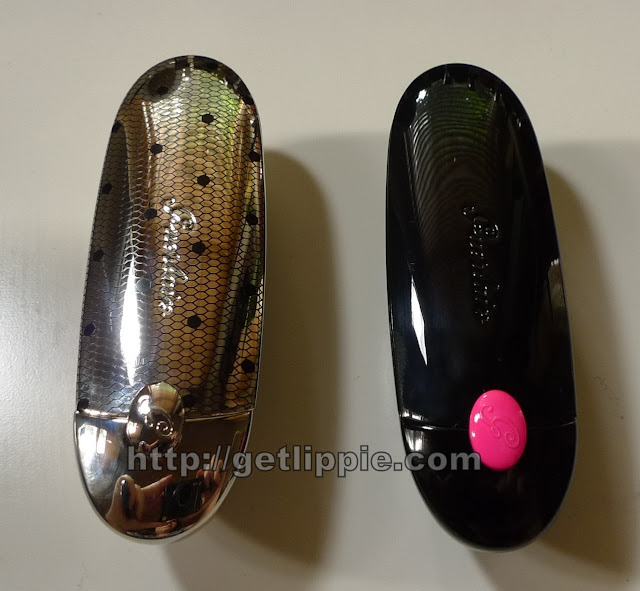 Madame Batifole (left) is from the limited edition Madame Violette autumn collection currently on counters, and has a fishnet effect etched onto the casing.  Provocative is from the Crazy Paris Christmas collection which will be on counter from November.  Both are rather cool bright pinks, but there are differences: 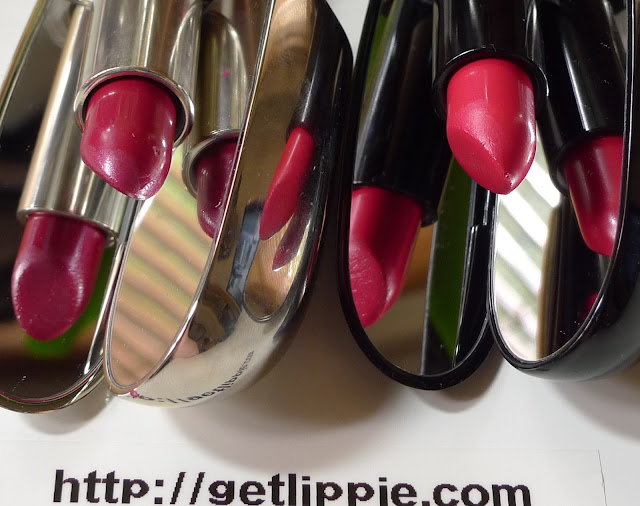 Madame Batifole is the darker of the two, and Provocative is lighter.  Contextually, Provocative appears the “warmer” shade, but is still quite a cool shade of pink.

Here are some more comparison shots:

Both are creamy shades, but as you can just make out in the flash picture above, Madame Batifole has a slightly more visible blue micro-shimmer in the formula.  Provocative contains it too, but it’s less visible in the bullet. On the skin, however, the shimmer is barely visible, it basically just adds a little depth to the shades and stops them appearing “flat”.

They’re both highly pigmented, and creamy.  Here you can see how Madame Batifole on the left is definitely a deeper shade, and Provocative is a little warmer in comparison, almost a bubblegum pink, whereas Batifole appears more magenta in comparison.

Here they are on my (quite strongly pigmented) lips:

I’d say that Madame Batifole is definitely the more dramatic shade to wear, being a little darker and deeper, Provocative is a perfect everyday pink shade, one I’d consider a neutral, but my tolerance to bright shades is quite high, and your mileage might, as they say, vary.

I tried wearing one lip of each to show how the differences aren’t, actually, that dramatic.  This is provocative on the top, and Madam Batifole on the bottom. Equally bright, equally pigmented, just one is a  little warmer, and one a little cooler in comparison.

Personally, if I could only have one, I’d have Madam Batifole, as I’m a lover of the dramatic lip colours, but Provocative is a great everyday pink too.  They’re both gorgeous, frankly.

The Fine Print: One’s a PR sample, and one was a purchase. It genuinely doesn’t matter which one is which.

Mental note: I shall never wear the foundation featured in this post ever again, it looks terrible.  I know.

This post: Guerlain Rouge G Comparison: Madame Batifole vs Provovative originated at: Get Lippie All rights reserved. If you are not reading this post at Get Lippie, then this content has been stolen by a scraper