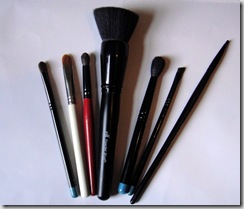 During Foundation Week recently, I mentioned my flat top kabuki brush a lot, and people on Twitter were asking me about my favourite makeup brushes as a result.  I’m not  a brush expert though, and many of my brushes are very, very old, but I do find myself reaching for a couple of classics over and over and over again.
In the same order as the picture: 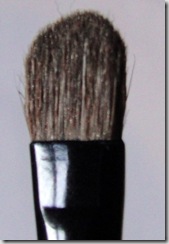 This is an old – a very old – MAC 218SE, a flat, animal-hair eye brush that is perfect for colour-washes.  It’s a very soft, silky feeling brush that grabs powder shadows well, and is great for blending.  I use this to add the base colour of whichever eyeshadow I’m wearing for the day (I tend to only use two different eyeshadow shades in most of my makeup looks). 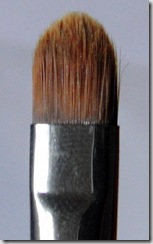 This is a Benefit “Talent” brush, which is the one I use for applying cream eyeshadows.  It’s flat synthetic brush, which is a bit less “grabby” than the 218, it doesn’t pick up powders as well, but with a cream, it deposits a smooth veil of colour on the eyelid.  The rounded edge doubles up as an eyeliner brush, though it’s a bit wider than the eyeliner brushes I’ll talk about later.

This is a very old Smashbox “pencil” or “bullet” brush, which I use entirely for defining the my eyelid crease, which is where I wear a darker shade in 80% of my own makeup looks. I find this technique makes my lids look less hooded.  Lots of companies make brushes like these now, but when I first got this one, around ten years ago, it was revolutionary!  This and the 218 are the two brushes I use on a daily basis almost without fail. 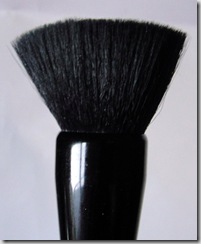 This is the infamous flat-topped kabuki brush which is my latest obsession!  I received it in a swap from a lovely  US reader, and it’s had a centre spot in my collection ever since.  This one is from ELF, and it’s a round, densely packed brush, which is great for picking up liquids.  I put foundation on the back of my hand, dab the brush into the liquid, then “buff” it very gently into my skin.  I find it leaves an almost perfect airbrushed kind of effect when I use it.  I much prefer it to the flat “hard” foundation brushes (similar to the Benefit brush above, but larger), which I find can leave you a bit streaky.

It also works really well with powders – it’s a very soft synthetic, brush – and doesn’t leave you with a cake-y effect when you use it. I bought a back-up of this for powders.  For £3.50, this is a bargain!

This is a MAC 266SE, which I find to be ideal as an eyeliner brush, in particular for using powder eyeshadows as eyeliners, which is something I do a great deal, to the extent that it’s a very rare day indeed when I use a pencil-eyeliner at all!  This brush is great because it’s fairly stiff, so it doesn’t splay when you press it against your eyelid, and unlike many cheaper versions, it’s thin enough that if you’re going for a very subtle thin liner effect you can do it.  I also use this for putting powder shadow on the waterline, which of course, I cannot possibly recommend anyone does, ever, but I do do it occasionally.  Allegedly.

This is a MAC 224SE, which is a very soft, very fluffy synthetic brush that I use for blending.  Especially useful since I started using Urban Decay Primer Potion on a daily basis!  Doesn’t rub and tug your skin so much as using your fingers does. 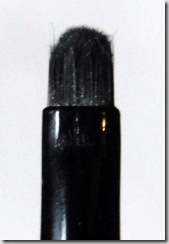 This is an ELF smudge brush, which has short, quite stiff (but yielding) synthetic bristles, it’s the most recent addition to my brush collection, and it’s one I like a great deal – in fact, it’s another one I have two of.  I use one for cream or gel eyeliners, I prefer it to the 266 for those, as there is less surface area for the product to dry out on as you’re applying them.  It’s also very good for tightlining, which is something I like to do to my upper lashes upon occasion.  I use the other one for cleaning up my cuticles after a messy manicure.  Again, excellent value from the people as ELF.

And last, but by no means least, my blush brush, which is a MAC 129SE (all my MAC brushes are special editions, I much prefer the shorter handles): 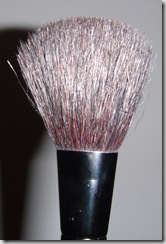 It’s not the greatest blusher brush in the world, it’s slightly too scratchy, but it does give a nice soft finish to blush, when it’s applied.  Whenever you see me use Cargo illuminator, I’ve used this to apply it, as it doesn’t deposit the colour in clumps as some brushes can.  I also have a denser animal-hair brush from Smashbox, which gives heavier coverage, and as a result, I mainly use that one for contouring.  Which I don’t do often.

As for looking after my brushes, I tend to wash them with a brush cleanser or shampoo on a weekly/monthly basis depending on how often I’ve used them, and I give them a quick clean on a cleansing wipe immediately after using them on a daily basis.  My advice basically is to  spend whatever you’re happy to spend on brushes, (and if that’s nothing, then so be it! Make up is all about finding out what suits you, and that applies to application methods as much as colours and the like), but whatever brushes you have, look after them!  The vast majority of my brushes are around ten years old (some are even older, I have a Body shop brush here that’s got Barbara Daly’s signature on it!), but if it weren’t for the worn off numbers, and slightly chipped handles, you’d never know.

What are your favourite brushes?  What have I missed? What2 brushes do I absolutely need to make up my top ten?

11 thoughts on “My top ten brushes”