The Worst Makeover I Ever Had 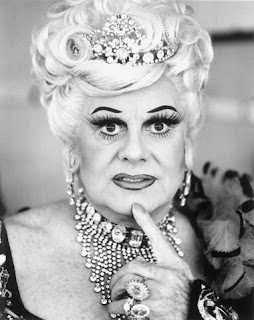 Was at the Estee Lauder counter in the Liverpool branch of Boots a few years ago.

I only really have myself to blame, I’d ignored a few of my own hard and fast rules about makeovers (namely the ones about ignoring advice from someone who has deliberately turned themselves tangerine, and – my bad – the one about women who willingly wear black lipliner in the middle of the day having no business with their hands near my face), and gone for it in spite of myself.

I have to say, the girl was a dab hand with the highlighter, I had it everywhere.  Cheekbones, upper lip, and on my brow bones.  The stuff on my brow-bones was, I kid you not, an inch thick!  Worse though, she’d used so many products on my face that the whole thing started slipping even as she was applying it, meaning she had to cake more and more and more powder over the top to keep the “look” in place.  It looked, and I kid you not, like crazy paving by the end of it. And she was so proud!  I went back to the office afterwards, and after listening to the insane giggling and dodging a volley of remarks referencing Danny La Rue (imagine the above picture with dark hair, that was me, that was), I vowed, there and then to never go to an Estee Lauder counter for a makeover again.

Well, today I’m eating my words, as I’ve been invited to a makeup lesson at one of Estee’s flagship stores, and I’m actually really looking forward to it.  I think the Estee Lauder brand has really pulled itself out of the “old lady” rut with the advent of Tom Pecheaux this year, I adored his Blue Dahlia collection a few months ago, and his Christmas collection (which I’ll be showing you soon) is beautiful too!  Plus, they’ve promised not to make me look like an elderly drag queen today, which is nice.   I’ll be showing you the results in the morning, so they can’t say they haven’t been warned!

9 thoughts on “The Worst Makeover I Ever Had”