Or, time for something completely different. 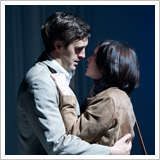 No, I haven’t gone completely crazy, one of my very first posts on this here blog was about opera, which I don’t think anyone ever read, so I think it’s okay for me to talk about my love of musical theatre here too.  And, I do love it. Growing up we were banned from watching musicals in my house, as my mum hated them – used to say that “people just don’t do that” whenever people burst into song.  As a result, as an adult, it’s entirely possible that I love them a bit too much.  I may have more musical soundtracks on my ipod than is entirely healthy, but hey, a good tune is a good tune!

However, I have to admit that when the opportunity to watch a preview of Love Story, which has been made into a musical by Howard Goodall and Stephen Clark, and has been produced by Michael Ball came up this week, I boggled a bit.  “But how’s that going to work?” I wondered to myself, imagining such delights as the “Leukemia Boogie Woogie” and other such nonsense.

Luckily, the starkly staged, surprisingly non-schmaltzy musical bypasses such cheese (aside from during the Pasta song, which is actually rather amusing, and it’s a tune I’ve had in my head ever since) and is played both well, and admirably straight.  The one act chamber-musical zips by, drawing you into the heart of the piece, and making you care for the characters, in spite of their flaws, and almost eradicates the memory of the incredibly saccharine seventies film it’s based on.

Everyone knows how it ends, of course – and if you don’t, they tell you in the first few minutes – and this should, realistically, stop you getting that engrossed in the story, but I don’t mind admitting that I had the biggest, most painful lumps in my throat throughout the last 20 minutes of the show, and I am one of the biggest cynics of all time.  And, I had something in my eye – yes, something in my eye, dammit – at several points, too.

I adored the simple costuming of the characters and Emma Williams (who plays Jenny) has one of the most gorgeous wardrobes I’ve seen in a long time. I wasn’t too sure that choosing to signify her illness via the cunning use of a cardigan was a great idea though.  It’s a simple motif, but hey, Cardigan of Death?  Hmn …

If I have a criticism of the play, it would be that Michael Xavier, whilst more than adequate, isn’t actually good-looking enough to play Oliver.  Shallow, perhaps, but hey, I’m a beauty blogger, sue me. It was just always in the back of my mind that – as written – Oliver is a bit of a boor (not to mention a bore, but that’s more the fault of the source material than the play), and it’s hard to see why Jenny would be so dazzled with him in the first place.  Your mileage, as always, may vary.

So, why did they do it?  The answer is, I guess, because they could.  And they did it well, if you ask me, I didn’t roll my eyes once.  And,  I haven’t enjoyed crying so much in ages.

Find out more about Love Story on Stage here. Or you can see their facebook page here.