This post might possibly veer into the Too Much Information-zone, featuring, as it does, talk of sleeping habits and routines.  Oh, and it’s a MrLippie post, too.  Get Lippie advises readers of a nervous disposition to look away now … 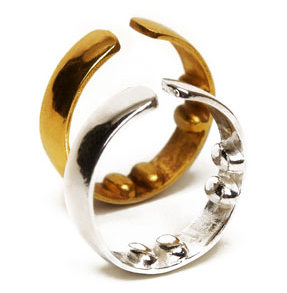 Allegedly, I snore. [No “allegedly” about it – Ed] I am still not entirely convinced that I do, but the phrase “you sound like a Brazilian logging camp” has been used in my vicinity, more than once,and sometimes by people who weren’t even in the same room overnight! So, when a package arrived and had Get Lippie beaming with excitement as she handed it to me saying “This is for YOU!”, my reaction was perhaps not the most enthusiastic. I would even go so far to say that I rolled my eyes. [He did.  A lot – Ed]

Added to being unconvinced about my snoring in the first place, I have a fairly lukewarm response to an awful lot of alternative therapy. I have a healthy dose of scepticism, alongside an aversion to trying new things, and the fact that this had been sprung on me without knowledge or consent [Diddums – Ed], the likelihood of this ring being tried out – for any period of time – was a touch  on the low side. However, my long-suffering other half has been spending a significant amount of money on earplugs throughout our relationship, and, as she points out, the wedding wouldn’t be going ahead if she hadn’t [DAMN right! Ed] so, I sighed, looked at the ring, and resigned myself to wearing it for a few nights.

Now, the whole thing of wearing jewellery to bed feels odd. Wearing a ring on your little finger that is designed to hit a couple of accupressure points (which will apparently minimise your snoring) is DEFINITELY odd. Still, I went for it. I had to make a concious effort to put it on, as changing your bedroom routine is never the easiest thing to do, and I slowly drifted off, trying to ignore the nagging sensation of the ring on my finger. Obviously, I am at pains NOT to make any Hobbit/Lord of the Rings jokes, as I suspect I will be banned from the blog forever [tempting – Ed], but it’s getting quite hard difficult.

Anyhow! I slept. Then I woke up. Some would say this is not entirely good news, but I shall ignore them. Upon asking a relatively trustworthy witness [Me! – Ed], it transpired that my snoring had indeed gone down by a fairly hefty factor. Hmm. Did it work? Seems so! Fast forward to the next night, again, the ring goes on, and I doze off.  Then wake up. So, how was my snoring? Quieter. Definitely quieter.

Interesting. Onto night number 3 it is then. Lights out, ring on, cold side of the pillow, unconciousness. Lower volume. Okay, 3 nights in a row is good enough for me, I think. I’ve continued wearing it, and I have to say, regardless of whether it’s a psychological association or the fact that pressure points genuinely work, the affect has been quite remarkable. Basically, I snore less – it does what it says on the tin!

So there you have it.  I did notice, however, that a couple of weeks after this review was written, the ring was “lost” in a tragic “forgotten where I’ve put it” incident.  I give up.

If you suffer from a delusional snorer in your life, you could do worse than picking them up a Snor-Ring from an independent chemist, a Wholefoods store, or you can buy them online from http://www.snor-ring.com/index.php where the sterling silver version will cost you £29.95.  We have no idea how it works, but it definitely does appear to.

If, however, your delusional snorer is a delicate little flower who is likely to refuse an unexpected gift of jewellery, then you can buy ear-plugs from SnoreStore, which is probably my favourite website in the entire world … tell them I sent you!

The Fine Print: The Snor-Ring was a press sample, however, I’ve been a paying customer of SnoreStore for years. It’s safe to say there wouldn’t have been a relationship (much less a wedding) without them.

This post: Sleeping with Snor-Ring originated at: Get Lippie All rights reserved. If you are not reading this post at Get Lippie, then this content has been stolen by a scraper

3 thoughts on “Sleeping with Snor-Ring”