I meant to write something completely different for my introductory “Get Lippie” post. But as I was writing last week during quiet moments in the shop, I began to feel like I was sitting down to watch a play halfway through the first act. I need to tell you how I got here, because I can hardly believe it myself.

I know the exact time it happened: July 14th, 2012. About 12:40pm. Early for lunch with a friend in Marylebone, I took a detour through the fragrance hall at Selfridges, and that decision changed my life. 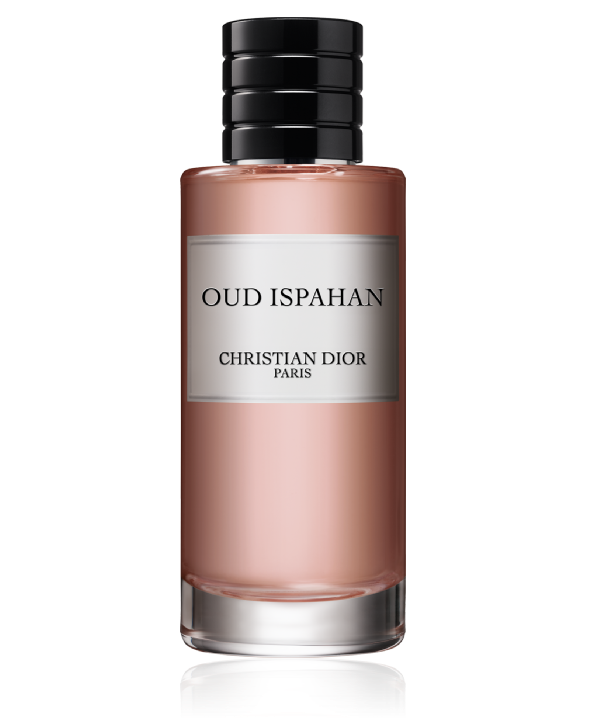 I think it was the softly glowing pink liquid that caught my eye. It certainly wasn’t the rather stark, sturdy bottle. Dior had just launched Oud Ispahan earlier that year as part of their more exclusive “La Collection Privée” and a jewel-like displayof bottles sat enticingly near the entrance to the Dior Fragrance Lounge.

The official notes are rose, oud, patchouli, sandalwood and labdanum, but I could have told you precisely none of that 18 months ago. All I knew was that when I sprayed it on my wrist, that I was instantly transformed into a languid, heavy-lidded seductress with the power to ensnare helpless suitors with one bat of my fluttering eyelashes (well – IN MY MIND). Make no mistake – I am about as far from the Thousand and One Nights as you can possibly get. I am a blonde-haired, green-eyed girl from coastal Alabama who could potentially be mistaken for a transvestite in heels. I’m more likely to swear at you than I am to whisper sweet nothings your ear. But this, I discovered that day, is the transformative power of fragrance, to make you into the person you never imagined you could be, if only until the clock strikes midnight and your rainbow whirl of silk scarves turns back into a Gap jumper.

Oud Ispahan is not original. The combination of rose and oud is a classic one in Eastern perfumery, and it has been done to death in recent years, from the inarguably beautiful but eye-wateringly expensive Kilian Rose Oud, to the slightlyless grand but more accessible Body Shop Rose Oud (creativity, it seems, is not a priority when naming your oud perfume).

But sometimes ignorance is bliss when it comes to fragrance (who really wants to hear that Caron’s Tabac Blond is but a shadow of its former glory when time machines are still in dreadfully short supply?) and to my fresh nose, Oud Ispahan smelled like the most haunting evocation of hazy desert sands and gold-leaved minarets this side of the Persian Gulf. A transparent, shimmering rose coupled with the raw, inner-thigh heat of oud, the nose-tingling prickle of patchouli and the richness of sandalwood smelled to me then like nothing ever had before.  I felt like I’d been punched in the stomach. Later that afternoon, I lay in bed sniffing my wrist three hours and listening to a low buzz in my head that I later came to realise foretold  that I was about to spend an ill-advised amount of money in a completely frivolous manner. Less than 24 hours later I found myself back in the Dior Lounge armed with a MasterCard and a wilful disregard for my bank balance.

Words like “cheap” and “value for money” take on new meaning in niche perfumery. If you love it and you can afford it (even as a treat), it’s good value for money. So I’m going to stick my neck out and declare that at £125 for 125ml, Oud Ispahan is excellent value for money. A couple of sprays carry on all day, and into the next. The sillage is epic – it’s about as close as you can get to a fanfare of trumpets announcing your arrival. And it makes people SWOON. You know the scene in the English Patient where Juliette Binoche tells charred Ralph Fiennes that she would summon her husband by playing the piano? I’m pretty sure I will summon my husband by wearing Oud Ispahan. Well, my next husband,that is.

After making such an unexpectedly extravagant purchase, I should have gone home and enjoyed my newfound love for the next year. But that’s not what happened. Instead, I picked up a book that had lain untouched on my bookcase for the last two years entitled Perfumes: The Guide by Luca Turin and Tania Sanchez, fell down the rabbit hole of niche fragrance, and a year, thirty bottles and a dozen new friends later, landed in a Saturday job in a perfumery in Marble Arch to support my financially ruinous hobby. Frankly, a drug habit would have been cheaper. But whatever, I can quit at any time. Honest.

Oud Ispahan and the rest of Dior’s La Collection Privée are available at Selfridges, Harrods and Dior Boutiques.

This post: Gateway Drug: Dior Oud Ispahan originated at: Get Lippie All rights reserved. If you are not reading this post at Get Lippie, then this content has been stolen by a scraper