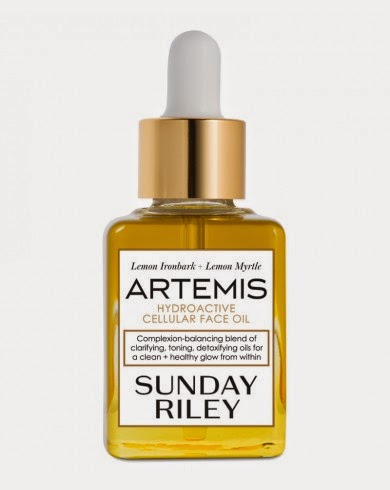 At this time of year, I always think a decent facial oil is an essential rather than an optional ingredient in your skincare regime, they add an extra level of protection to your skin in the wind and the rain and the cold, and they are a godsend on chapped and sore skin.  I have a few that I rotate (Clarins is an exceptional source of affordable facial oils on the high street, btw), but recently I have fallen, hard, for this little bottle of oily goodness.

A clarifying oil, with claims to be balancing (it also claims to be lemon-scented, but more about that later), it contains black cumin seed oil, pomegranate seed oil, lemon ironbark and lemon myrtle oils alongside milk thistle seed oil.  It’s quite a thick and sticky oil, which you’ll only need two or three drops of for your whole face and neck, and it is a bright and cheerful sunshine yellow both in the bottle and out.  The major claims for the product include soothing redness and irritation, it’s an anti-inflammatory, and it is also said to neutralise the bacteria that causes spots!

Since I’ve added this to my regime, in place of other, thinner and lighter oils, I genuinely have noticed that my continual redness, which is the bane of my life, has been both less frequent to arrive and shorter-lived when it does actually appear.  In fact, there have been a couple of days when I’ve felt able to go without foundation, something previously unthinkable in the winter months!  It sinks in easily, even though it’s rather sticky, and this is a blessing given the major “problem” with the product, which is:

Actually, the smell is a major factor when it comes to any Sunday Riley oil, and it is both a blessing and a curse … Sunday Riley Artemis oil smells like a broccoli graveyard farted on your face. (as does Juno, btw)  It doesn’t last long at all, it’s gone almost as soon as you apply, but even with my currently lessened sense of smell, it gives me pause before applying it.  Now, that out of the way, I actually quite like the fact that Sunday Riley doesn’t bother adding a whole bunch of unnecessary essential oils to a product like this just to disguise the fact that the actual active ingredients don’t smell the nicest.  It’s refreshing that all the ingredients in the formula are there because they have a job to do on your skin, rather than on your nose.

The smell has an added benefit too, because you’ll use less of it than you normally would an oil product, and when you consider that the bottle costs £98, this isn’t such a bad thing!  I’ve used mine daily for three months, and I’ve barely made a dent on the 30ml bottle, I estimate I’ll get at least a year’s use out of it.  I’m lucky, mine was a gift, but I would definitely re-purchase this once it’s run out.  I used to use Juno, and I loved it, but Artemis, for my money, and my sensitive, reddened slightly combination skin is even better.

This post: Sunday Riley Artemis Hydroactive Cellular Face Oil originated at: Get Lippie All rights reserved. If you are not reading this post at Get Lippie, then this content has been stolen by a scraper