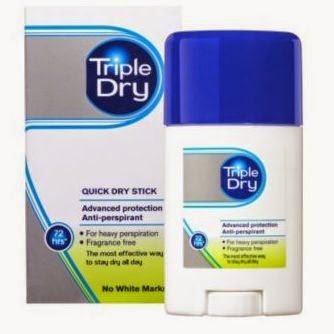 You may or may not know this, but I have a bit of a smell problem at the moment. No, not like that, but my parosmic condition means that I can’t smell myself (I can’t smell you, either, don’t worry), and not only can I not smell myself, I can’t smell any of the smells I produce, either.  Any of them.  Not a one.  No, not even that one.  Seriously.

Now, whilst this makes the early evening commute more of a pleasure because I can’t smell other passenger’s BO, or stinky feet in the summer, it can make me a bit paranoid. Well, let’s face it, just because *I* can’t smell myself doesn’t mean other people can’t either.  It’s a bit awkward, to say the least.  Oh, I’m clean, I still shower, and I still use perfume (some of which I can actually smell, a bit, but more about that in another post), but … yes, I worry.  So would you, I assure you.

So the last few months have seen me move to a more hardcore kind of an armpit product, and I’ve been trialling Triple Dry for  a while now, and I have to say that for my requirements, it’s really good.  Triple Dry is actually an anti-perspirant, and its unique selling point is that you only need to apply it three times a week.   Apparently, you’re supposed to apply it nightly for four nights, shower as normal in the mornings (it’s waterproof) and then after that, you apply it every two or three days as you would a normal deodorant product. It kills the bacteria that produce odour, so you don’t need a different scented product to go with it.

I like it because it is unscented, and as such both doesn’t irritate my irritable nose, and doesn’t clash with any of the limited scented products that I do apply.  I have to admit that I do not use it in the way you are supposed to – being as paranoid as I am, I can’t trust it that much – I use it as I would any deodorant/antiperspirant, going for a daily swipe in my clean pits.  So far, no problems, and on the odd occasion where I have forgotten to apply (happens to the best of us!), no problems then, either.  I go through an elaborate “how do I smell” ritual with my husband in the morning – parosmia does rather tend to strip one of one’s dignity at times – and he’s had no issues.

It’s on the pricey side for an antiperspirant – I prefer the stick version to any other, which is the priciest of all – coming in at around £7.50 or so, but it lasts well, mine is several months old now, which when you consider I’m using it two or three times more than I’m supposed to, is pretty good going.  And hey, what price trust?

The Even Finer Print: We’re not featuring full fragrance reviews on Get Lippie at the moment owing to illness – please see The Parosmia Diaries for more.