Paradox by 4160 Tuesdays and Get Lippie 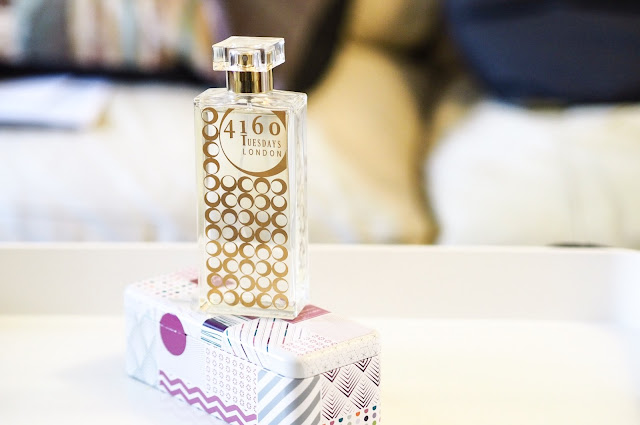 I suspect there isn’t a perfume writer alive who hasn’t daydreamed of creating their own fragrance. A perfume writer who hasn’t imagined sitting with a perfumer at their organ, selecting ingredients, puzzling over formulas, dabbling with modifications and attempting to create that great, mythical “perfect perfume” of their innermost desires, is, I think, barely a perfume writer at all.

Back in my smelling days, the “perfect perfume” of my imagination would have been a spicy powerhouse; containing saffron, cinnamon, cardamom, clove and black pepper, with punchy and overlooked carnations over amber and a dirty, dirty musk. It’d smack you in the face on first application, and never, ever let you go.  It would have been a melange of Nu by YSL, which is the perfume that taught me about the citric slap of black pepper, and Ambre Sultan by Serge Lutens (aka the one where I learned to love amber), alongside the suprisingly sparkling bright cardamom-rose spice of Marrakesh by Aesop, coupled with the creamy puddingy-hug of Safran Troublant by L’Artisan Perfumer.  My perfect perfume would have tickled your nose, made you hungry and (in all probability given the ingredient list), made you ever-so-slightly photosensitive.  It wouldn’t have been polite, and you definitely wouldn’t want to wear it to the office, either. 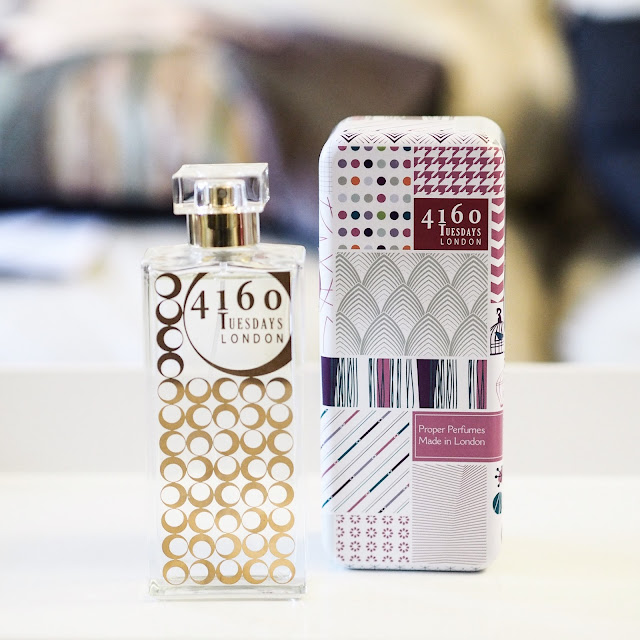 Here in the now, however, I’m living with a brain-damaged nose which is still suffering the after effects of a prolonged and isolating bout of anosmia, where I couldn’t smell anything at all. Followed by a long, long battle with parosmia and cacosmia (a variant of parosmia which made my life an unrelenting misery, as it made literally everything smell and taste like sewage), I’ve found that my perfume tastes have changed quite considerably, as have my nose’s abilities as a result.  Simply put, I don’t smell the way I did before.  I can’t, and don’t know if I ever will get my full “smell” back.  Don’t get me wrong, I’m recovering and I’m happy to say that I don’t smell (and taste) sewage all the time any more, but my olfactory nerve is still broken. It’s much less broken than it was, but a lot of perfumes still smell “strange” and burned to me, mostly thanks to the vanilla that I still have a particular problem with.

One day last November, after a trip to Paris where I’d discovered that I could smell violets and citrus in an undistorted fashion,  I made a celebratory off the cuff remark on Twitter ” … so all I need now is a violet and citrus fragrance of my very own!” hoping for some recommendations from my followers, but within a couple of minutes I had an unexpected reply from the divine Sarah at 4160 Tuesdays: “I’ll make you one”. 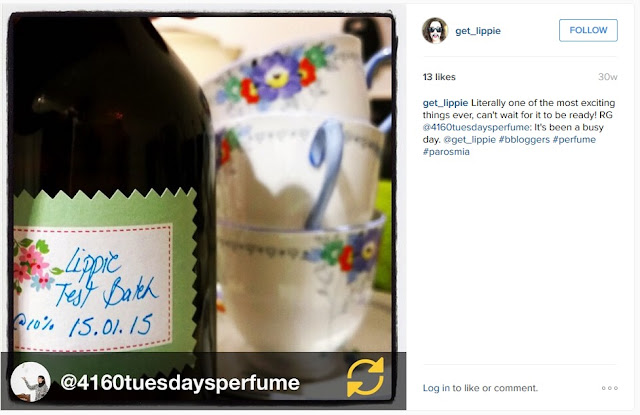 And so, on a rainy Saturday afternoon last November, Sarah and I sat down and made a fragrance writer’s dreams come true.  It wasn’t how I’d imagined it – instead of finding the ingredients that made me swoon, we were basically eliminating ingredients that made me feel sick.  Those things that smelled “good”, or even just plain “undistorted” we set to one side to create accords with later.

Heavy base ingredients such as vetiver and patchouli were rejected for setting off a parosmic effect, and vanilla was rejected in a rather sweary fashion – at that time, my parosmic hallucination was a flat and stale, and oddly savoury vanilla-esque scent, which made me want to puke – but as I’d suspected from my Paris trip, ionones (the chemicals that give violets their distinctive smell) and citruses worked well.

We used three different ionones, for a green and woody violet with not too much sweetness, and created a citrus accord with yuzu and cubeb to go alongside.   We added orris, to underscore the violetty ionones, and petitgrain to underline the citrus and woods, then created a musky base with some woods to round out the formula.  Eventually we mixed the three accords – the violet, the citrus, and the musky woods – in different concentrations and created three or four different versions.  One sharp with yuzu up top, one woodier with the petitgrain taking centre stage, and one where the orris was allowed to soften the more spiky citruses, and punch up the ionones.

It was a funny and emotional day, consisting of the frustration of not being able to smell ingredients I know I loved, and the stress of other previously beloved smells causing nausea.  There was the occasional joy of “getting” a smell, and knowing it was right, and smelled good.  We talked and talked and talked, and the triumph of being able to put those occasional joyous smells we found all together and create something different, something “other” from them individually, and having that smell right too was almost indescribable.  I’d been stuck in a bleak place at the time, one that either didn’t smell, or had smelled so bad that it made me ill, with nothing in between. Having a space, alongside a safe pair of hands to guide me to those things didn’t smell bad, helped me realise that maybe life wouldn’t always smell (and taste) like a sewer, and, I think that’s where my real recovery from my problems began. 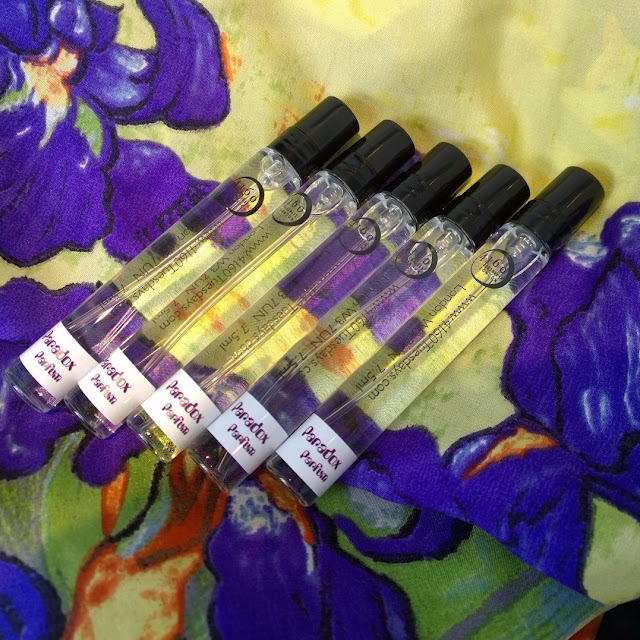 A newly created perfume needs a couple of weeks to macerate, so a good fortnight after my session with Sarah in the 4160 Tuesdays studio, the time came to smell the mods. To my nose there was a clear winner, the yuzu blend was too spiky, the citrus woke my nose up, but then didn’t really blend with the violets (a definite perfume of two halves, this one), and the petitgrain muted the violet too much, so the winner was the orris (or iris) blend.  Sarah agreed, and so now we call it Paradox.

To my nose – but possibly not to anyone else’s! – Paradox begins with a grassy, almost hay-like opening, green from the ionones and bright from the citrus, before the purple, purple violets poke through.  It’s not a sweet violet though, the petitgrain and yuzu stop it falling into parma violet-territory. Someone who got a sneak preview recently described it as smelling of a violet lemonade, and that’s such a great description that I’m stealing it.  In all honesty, I can’t smell the musks or the woods much (that’s a problem with my nose, not the perfume, however), but I’ve smelled Paradox without them, and they definitely do give body to the fragrance.  (This isn’t a review, btw, just my impressions of how it smells to a parosmic – your mileage will definitely vary).

Most of all though, to me, Paradox smells of hope, and unexpected friendship.  When I was at my rock bottom, several people – even some I didn’t know that well – held up their hands to help me out, and with that in mind, Sarah has decided to sell Paradox so that we can extend that helping hand to other sufferers via our great friends at Fifth Sense. For me, one of the worst things about living with parosmia was the feeling that I was alone, and no one understood. At times, I literally thought I was going insane. Fifth Sense helped me a great deal, and so, for every bottle of Paradox sold, either £5, £10, £15 or £25 (dependent on bottle size) will be donated by 4160 Tuesdays  to Fifth Sense, so they can help more people before they fall into the black hole of desolation, as I did.

Paradox definitely isn’t the perfume I’d have created with Sarah if I could still smell.  It’s rather too ladylike and genteel (but still spikey!) for that.  But I guess that’s what makes it so special.  Without my parosmia it wouldn’t have existed at all.  And how’s about that for a paradox?

Paradox is available from 4160 Tuesday’s website, and will be available from a couple of other retailers soon.  I’ll update this post as and when they’re confirmed. Prices start at £15 and go up to £90, and every single bottle sold helps charity. Oh! Oh!  Your bottle won’t be gold (it’ll be black) I’m afraid – this is my own personal supply, and I get the only gold bottle of Paradox that will ever be made.  So there.

Important note: Paradox isn’t a perfume for anosmics, please bear it in mind. It’s a real perfume created (partly) by a parosmic that both smells good to her, and to the people surrounding her.  It’s not designed to create a smell-like stimulus to the trigeminal nerve as some other perfumes which have been created for the smell-disabled do.  They contain ingredients like menthol and capsaicin, which can be irritants both to the skin and nose, and wouldn’t actually smell anything like a “fine” fragrance.  The moral/lesson/essential paradox of Paradox is that a
fragrance writer still wants to smell good even when nothing at all smells good.

The Fine Print: Get Lippie was not compensated in any way, shape or form for writing this piece.  All proceeds from Paradox are donated to charity by 4160 Tuesdays directly, and Get Lippie has no financial interest in the product.

This post: Paradox by 4160 Tuesdays and Get Lippie. originated at: Get Lippie All rights reserved. If you are not reading this post at Get Lippie, then this content has been stolen by a scraper

3 thoughts on “Paradox by 4160 Tuesdays and Get Lippie”