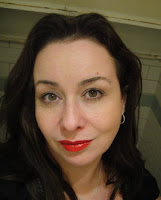 My name is Get Lippie. I’m 45, and I’m tired.  I’m tired of “older” being beauty industry shorthand for “ugly”.  I’m tired of being nagged about my age by the products I use.  I’m tired of constantly reading the same old (ha!) messages all the time which imply that the only quality women have worth venerating is “youth”.  I’m tired of toothpastes and deodorants, and foot creams and handcreams, and shampoos and lipbalms, and practically everything else on the planet using the message: “don’t get old, you’ll be worthless (bitch)” to create panic and stimulate demand for products.

As I get older, it (the messaging) enrages me more.  Because it’s a lie.  I repeat: It. Is. A. Lie.  When I was younger, I was terrified of old age – turning 30 was horrific for me, I was “officially old” according to the adverts, and the media I was consuming, and I spent the last couple of years of my twenties alternately panicking at the thought of being over the hill, and raging about how “unfair” it was that we have to get “old”.  I was a fucking idiot.  Two years of my life wasted panicking about an arbitrary deadline imposed entirely about someone else’s idea of how women “should” look.  Young.  And worrying that being over thirty (and worse, being over thirty and single) is to be a waste of flesh.  We use old in the beauty industry and media to scare people, to create panic,  to force people not into making peace with their age, but to worry about it.  And as the end result of that fear, that worry and that panic created by the beauty industry itself is (besides, of course, them offering the “cure”) is to make women hate themselves.  To remove the comfort of liking the skin that one is in.  Worse, to make being comfortable in your own skin seem … incongruous.  Eccentric.  Insane. Freaky.

Women start to panic about being old in their late teens.  I see it on Twitter/Instagram and Facebook all the time, young, beautiful,  intelligent, humorous women worrying about turning 20/25/30/35 whatever, “this time tomorrow, I’ll be old …” because all the messaging we have in the media is that to be old is to barely be a woman at all. It’s depressing.  And heartbreaking. And infuriating that these women are both beating themselves up over an arbitrary number, and writing off the hundreds of women they know who are older than them as “worthless”, however inadvertently.  Anti ageing products fuel this panic in younger women, and infuriates some of us elderly bitches to boot.

Older women are not ugly, or worthless or useless.  We are, however, invisible.  Oh yes, there’s Jane Fonda, and Helen Mirren. Well, yippee! Bully for them.  But for every Jane Fonda or Helen Mirren or Judi Dench, there are tens of thousands, hundreds of thousands, oh sod it, MILLIONS of … ordinary … women in their 30’s, 40’s, 50’s, 60’s, 70’s and even beyond who will never be Jane Fonda, or Helen Mirren.  Don’t even want to be those people.  Don’t care about them.   There are millions of us, but where are we properly represented in the beauty industry?  If you’re not under 25, or haven’t had the genetic blessings (and good cosmetic surgery) to still be considered a (freak!) sex-symbol in your sixties, then you don’t exist.  We use teenagers without a line on their faces to sell wrinkle-cream to older women, then photoshop the hell out of the pictures because even being young, increasingly, isn’t good enough, you also have to be pore-free, line-free, and smooth, smooth, smooth.  Like an egg, only without the personality.  The more we make the images behind the products unreal, the less people will believe the claims for your product.  I am never going to look like the woman in the advert because I used a £35 facecream, and I don’t care how much science went into the pot. I never, ever will.  And don’t use a sixty-something “sex-bomb” in a patronising attempt to appeal to “older” ladies because I won’t look like them, either.  My mum might though.

I don’t want to be younger, I want to not be scared of getting old. I want my products to stop feeding that fear.  I want adverts to stop telling me that “old” women need to be less like themselves to be acceptable.   No face cream (or deodorant, or toothpaste, or even bloody foot cream for that matter) is going to stop me being the age I am.   I want to be the best me I can be.  I’m happy looking like me, for all I resemble an over-stuffed sofa with a smacked arse in place of a face.  Frankly, the younger, thinner, and inarguably much better-looking me was an even bigger pain in the behind than I am now – I don’t think I’d like her that much these days, and I really didn’t like her all that much at the time, now I come to think about it.

Ageing is a process.  We’re all of us getting older, right from the day we’re born. It’s inexorable.  You’re going to be “ Let’s make the inevitable products required to make ageing less of a chore (because it’s tiring enough just being old without added worry about looking old), and make the message behind them positive, not negative.

This post: On being an “older” beauty blogger originated at: Get Lippie All rights reserved. If you are not reading this post at Get Lippie, then this content has been stolen by a scraper