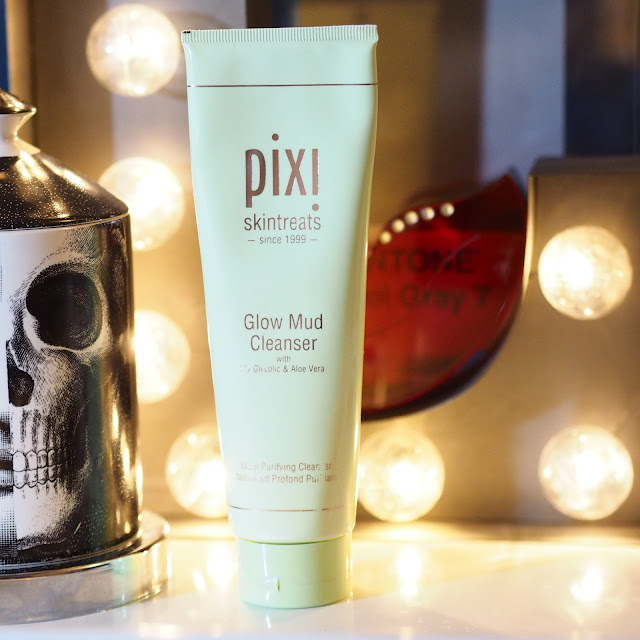 I’ve been very impressed with the Pixi Skintreats that I’ve tried so far. It’s a well-priced range of good, not too confusing basics, that perform well, and do what they are supposed to without patronising or bewildering the customers.  Glow Mud Cleanser is a great product from the line, being a clay cleanser that doesn’t strip or dry out the skin.

It contains aloe, which gives the formulation plenty of slip when you’re applying it, and it also contains glycolic acid, which has a slight exfoliating effect too, so this is  particularly good for oilier or congested skins, as it will help with clearing spots when it is used regularly.  My skin has been a bit hormonal recently, the changes in the weather and the advent of central heating becoming a necessity in the flat,  and my skin doesn’t really know what to do with itself as a result. So it’s pumping out oil like there’s no tomorrow. It’ll settle shortly (it does this as we head into winter every year), but I’m finding this great for clearing zits as they begin to appear.

You can also use this as a mask, just apply it as you normally would, and leave it for five or ten minutes or so, before rinsing it away. This allows the glycolic to stay in contact with the skin more, so it gives a deeper exfoliation effect if you leave it in contact with your skin than you would with a cleanser normally. You’ll get the familiar “glycolic tingle” when you’re using this, but if you have sensitive skin, I personally wouldn’t follow it with any form of acidic toner (including Pixi Glow Tonic tbh), as this might lead to irritation and redness if you overdo it.  You’ll need to use a sunscreen after, as you would with any glycolic acid product.

I don’t use this every day – my skin is normally clear, and it is pretty sensitive most of the time, but for those days when I need something a little more … powerful … than a balm cleanser, then this one can’t be beat.  Best of all, it’s only £18, and you can find it at Pixi, at Cult Beauty, and Marks and Spencer!

This post: Pixi Skintreats Glow Mud Cleanser originated at: Get Lippie All rights reserved. If you are not reading this post at Get Lippie, then this content has been stolen by a scraper