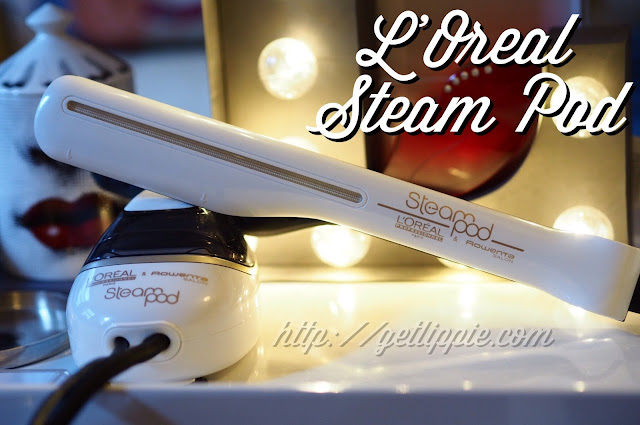 I don’t actually remember the last time I straightened my hair on a regular basis.  There was a time when my (naturally) curly hair was kept such a secret that it frequently came as a huge surprise to people that my hair was anything more than just slightly bouncy. I went through straighteners like no one’s business!  For the last year or so though, I’ve been embracing my inner curly-girl, and occasionally cursing the fact that, actually, curls are a lot more work than straight hair!   And don’t even talk to me about frizz …

Anyhoo, I’ve about reached the end of my tether with my curls at the moment, so when the chance to review a Steampod Straightener from L’Oreal came up, I kind of leapt at it. Well, not kind of, actually leapt! The system – for it is a system – use both steam and keratin-enriched styling creams to infuse conditioning ingredients into the hair, before the ceramic plates seal the cuticles and straighten your hair. 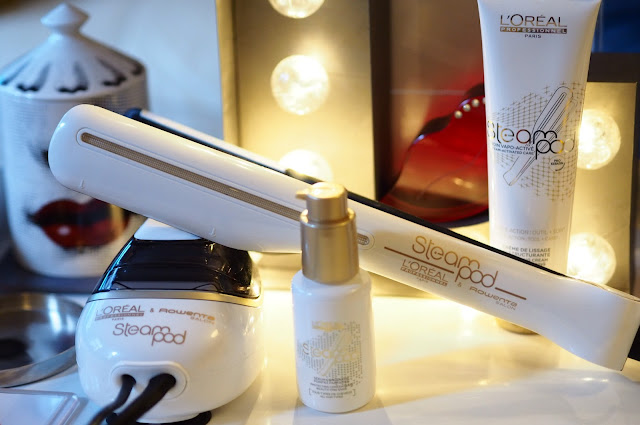 Inside the rather imposing box are one pair of straighteners (which come complete with a comb attachment, which I love), one steam pod itself, one replenishing styling cream, and one smoothing serum.   The straightener and steam pod are attached to each other by a very sturdy wire, and the pod (which you must keep on a flat surface when in use, as it is full of water – the water chamber itself is removable for easy filling and emptying) comes complete with sucker pads to keep it in one place.

You do NOT use this on wet hair.  You apply the styling cream to damp hair, and either blow- or air-dry until your hair is 100% dry, then, after applying a little of the protective serum to the ends, you then use the straighteners as you would any others.  Well, almost.  They’re a little wider than normal straighteners and this is to encompass the row of steam nozzles (which only activate when the plates are pressed together), and the comb attachment below the heated ceramic plates.  You have to ensure that at all times the steam-holes are below the ceramic plates, so the steam infuses the creams first.  This can mean a bit of manouvering (especially around the back), but the set has arrows to show where the steam holes are – after a bit of practice, it’s quite easy to remember.

The Steampod promises mirror-like shine at a lower temperature than a normal straightener, so does it deliver on that promise?  The first time I used these, no it didn’t, actually.  I initially used mine at 180 degrees (I usually use my traditional straighteners at the highest  temperature, having learned the hard way that whilst my curls aren’t the tightest, they are incredibly tenacious) and tried out the “normal” hair styling cream alongside the low temperature.  I found that my hair needed several passes with the straighteners to get straight, and even with a liberal application of the protective serum, the ends were still a bit frizzled, and, I admit, I was disappointed. Frizzy bits and hard work?  No thanks.

Nonetheless, I tried again (for it is not only my hair that is tenacious, at times), this time pushing the temperature up to maximum, as I am ordinarily wont to do, and this time using the replenishing cream for thick hair. I used it over wavy, air-dried hair, and the difference was amazing.  I won’t go so far as to say my hair was mirror-shiny, but it was soft, shiny and straight, and best of all, felt like natural hair.  Sometimes I find that straightening my hair with a styling cream leaves my hair feeling slightly plastic-ky afterwards, and without an ability to bend naturally.  I didn’t have this problem this time. Hair felt natural, and looked like naturally straight hair, rather than “ironed” hair. I loved the results, second time around.

Plus, it lasts.  The publicity for this states that it “can last up to three days” (emphasis mine) I’ve found that it does last at least that, and it has survived several bouts of rain this week too, both drizzle and proper stormy wind and rain without any permanent damage.  I’m impressed.

So yes, there’s a bit of a learning curve with this one, taking time to figure out the best positions to straighten your hair in, and figuring out which temperature works best for your hair (personally, I never put much stock in anything that says “styles at a lower temperature”, because, frankly, my hair doesn’t work that way) and making your choice of styling cream correctly in the first place – my hair isn’t particularly thick, but there is a hell of a lot of it, and the ends of mine are bleached, to boot. I’d recommend anyone with anything but the very thinnest/finest of hair avoids the “fine/normal hair” cream, and just goes straight for the “thick/very sensitised” version.

All of which brings me around to the price.  It’s £170 (though I have seen it for £143 on LookFantastic this weekend), which is a heck of a lot of moolah.  And then there are the creams/serums at £15 each to boot.  I can’t deny that it’s a lot of money.  A lot of money.  Do I think it’s value for the money?  I’m  not sure, actually.  Yes, it’s quicker than traditional straighteners (the combination of the steam, the comb, and the plates mean you can straighten more hair in each “grab” than with just ceramic plates), and yes, hair feels healthy and conditioned – once you get the balance right – afterwards, but £170?  I just don’t know.  £143 (even though it is on offer), feels like a better price to me.  Mind, Cloud 9s retail at £130, and even GHDs cost over £100 these days, and I do feel like any of them would be an investment purchase, to be honest.

I tell what though, I have just bought backups of the creams and serums, because I can tell there’s going to be a lot straighter hair in my future … make of that what you will.  My GHDs were binned long ago, and my Cloud9s have been quietly gathering dust under the bed for over a year now. Has the Steampod replaced them?  Only time will tell, but I will be using it again this very evening …

This post: L’Oreal Steampod Review originated at: Get Lippie All rights reserved. If you are not reading this post at Get Lippie, then this content has been stolen by a scraper