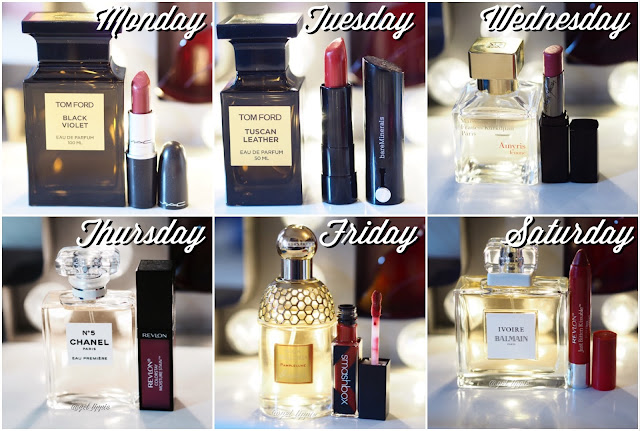 After spending last weekend doused in Tom Ford’s finest Black Orchid (albeit in the new Eau de Toilette version rather than the EdP), I was obviously stuck in a rather Tom Ford kind of groove for the early part of this week.

Monday brought Tom Ford Black Violet, a scent which I have always preferred to Black Orchid, for some reason (but it’s now discontinued), a gloriously rich and decadent fragrance, one which reminds me of the glory days of women’s cinema in the forties.  It’s a fragrance with shoulder pads and red lipstick, which I subverted by not wearing shoulder pads, and wearing with MAC Hot Tahiti, which is a slightly browned wine-shade, which reads like a neutral on my lips.  I did wear black leather though …

Tuesday was Tom Ford Tuscan Leather, long one of my favourite fragrances.  I was surprised on wearing it this time, however (the first since I lost my sense of smell last year) that I can now pick up the raspberry notes that, in other writers descriptions, have always mystified me somewhat.  A nice discovery!  It still smells leathery to me – which I love – but now it has an extra dimension that I never noticed previously, a great thing. I wore it with Bare Minerals Call The Shots which is a great red lipstick.

Wednesday brought a neglected gem from my perfume collection, which was Maison Francis Kurkdjian Amyris Femme.  This had been shuffled to the back of one of my drawers, and I confess that I’d completely forgotten about it as a result.  I’m completely kicking myself about that now, as it is incredibly beautiful.  I described it on Instagram as luminous and sheer, bright with citrus in the opening, and warm with woods and resins in the base.  Classy and expensive-smelling, it’s radiant and gorgeous, and I can’t wait, actually, to wear it again.  So I’m wearing it again today as I write this … I paired it with Laura Mercier Cherries Jubilee Lip Parfait, which is a sheer natural red, which I like a great deal too.

I spent some of Thursday talking to various government bods (like you do) so I thought I’d wear something classic.  Naturally, when I opened the box, I was a bit hacked off that my bottle of Chanel No 5 was actually a bottle of Chanel No5 Eau Premiere. Not the end of the world, admittedly, but annoying, especially when it turns out that Eau Premiere is just a little too restrained for my damaged nose to pick up in any detail.  It’s very nice, I’m sure, but it’s no No5.  Now I’m wondering where my bottle of No5 has got to, I know I have one!  I wore it with Revlon ColorStay Moisture Stain in India Intrigue, which is one of my favourite pinks, as it lasts and lasts.  It does dry a bit though.

On Friday, I was planning to meet some friends for dinner, so an old favourite fragrance was in order, and I picked Guerlain Pamplune Aqua Allegorica.  Grapefruit scents have been tricky for me for a while, thanks to their sulphurous qualities (I struggle with vetiver as well for the same reason), but I think it’s coming back now.  Either way, Pamplune smelled good, well as good as a sweaty grapefruit (and I mean that in a good way) can, let’s put it like that.  I wore it with Smashbox Lip Lacquer in Legendary Red, which is a smashing red – I’m ashamed it’s taken me so long to wear it.

Saturday I was ill, again, I’m totally fed up with it now, but  it’s becoming a way of life at the moment, it appears. Anyhoo, I still wanted to smell good, so I picked up my bottle of Balmain Ivoire, which is soapy-fabulous (even though rather thin in comparison to its 80’s-tastic fabulousness before reformulations and re-releases happened to it) and classy and very, very clean.  Still lovely.  I had been planning to wear it with a revlon lipstain, but as I spent the day in my pyjamas, that didn’t actually happen …

What’ve you been wearing?

The Fine Print: PR Samples and purchases, all combined.

This post: LipsNspritz of the Week 06.12.15 originated at: Get Lippie All rights reserved. If you are not reading this post at Get Lippie, then this content has been stolen by a scraper