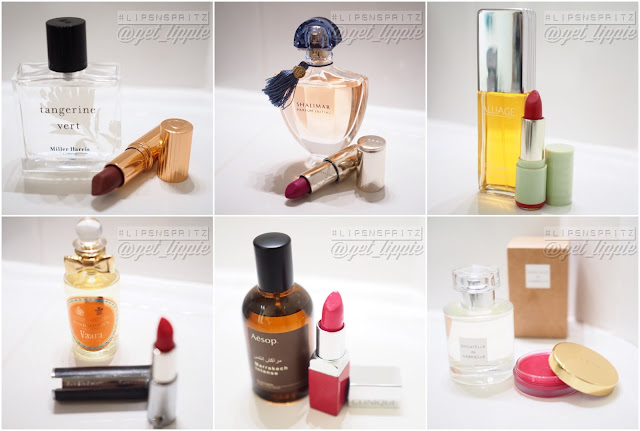 It’s been a mixed bag, fragrance-wise this week.  It’s ostensibly summer, but I can’t imagine anything less summery than this dark and dank July we’re having so far!  Like with the weather, my perfume choices have been a bit all over the place, too.

Monday brought Tangerine Vert from Miller Harris, a herbal-fresh and zingy citrus that was perfect for blasting away those dreadful Monday morning blues!  This and Hermes Eau d’Orange Vert are very similar mood-lifters for me, both feature, I think, a little hit of mint amongst the orange and other leafy green herbs, and it’s bother awakening and refreshing, and just that little bit “different” to a normal lemony-citrus as a result.  I wore Tangerine Vert with Charlotte Tilbury Walk of Shame lipstick, which is a great brown-ish neutral that teeters on that 1990’s-style rust, but just avoids it.

Tuesday was Guerlain Shalimar Parfum Initiale, and byTerry Cherry Cherry lipstick (stupid name, great pink).  I was in Paris for the launch of Parfum Initiale a couple of years ago, and so it will always have a special place in my heart – I love the velvety iris and smooth vanilla, it’s also surprisingly rich and earthy (almost  … carroty!) for what was intended at the time to be a teenage girl’s way into the world of Shalimar.  It’s very different to many ostensibly “teenage” fragrances, not smelling of sugar and fruit, which is why I think it has been discontinued, and why that increasingly Le Petite Cherie Robe Noire, with it’s cherries and black tea, and hints of chocolate has taken over as the flagship Guerlain fragrance.  Don’t get me wrong, LPCRN is good, but it’s just not as interesting (to me) as Parfum Initiale is.  Was.  Whatever.

Wednesday found me in Estee Lauder Alliage.  I love Alliage, as perfect an example of the pinnacle of seventies chypres as can be, it is both bitter green and blinding white, with galbanum and moss and crystalline white flowers, you could wear a tweed jacket and starched white shirt with this and it would be perfect.  I own neither, and wore it with black jersey (my default) and still managed to feel like a grownup all day.  I do think Lauder neglect their amazing back catalogue rather horribly in favour of their newer releases a great deal – does the world really need four versions of Modern Muse above some of the genuine classics in the Lauder catalogue?  Does Kendall Jenner read Descartes in the original? – but the fact that their classics are still available, and largely untouched, and accessibly priced is a great, great thing.  Go try some of them.  Also only of my favourite reasonably priced brands is Pixi, and this lipstick in Raspberry Blush is amazingly good and pretty.

Thursday was Vaara by Penhaligons.  I love Vaara.  It’s a fruity-floral, normally a category I eschew, but it is interesting and original, redolent of quinces and a hint of saffron, over a bed of coriander (the seed,  not the leaf) and is beautiful and gorgeous and wonderfully radiant. I love wearing it.  It also has one of the prettiest boxes Penhaligons have ever done.  The lipstick was Givenchy Le Rouge in Carmin Escarpin, which is the lipstick I wore in Paris on my honeymoon, that’s how much I love it.

On Friday, I wore Marrakesh Intense by Aesop.  This blend of rose, black pepper and cardomom is both spiky and powdery and wonderfully evocative, it makes me a little woozy in the best possible way when I wear it.  I do have to confess that I have a sneaking preference for the original Marrakesh formula, which punches up both the spiky black pepper, and the plush cardamom over the silky rose, but this is still magnificent, and has better lasting power overall.  The lipstick was Punch Pop by Clinique, which is one of my all-time favourite pink lipsticks.

Saturday was a lazy day in front of the TV, frankly, so I wore things that didn’t take much thinking about: Bagatelle de Gabrielle by Omorovicza, which is a gently pretty, rather prim, little white floral based on, but not overwhelmed by orange blossom.  It’s rather a “spa” kind of scent.  Pretty, but slightly unmemorable.  I paired it with Aerin Rose lip balm. To be honest, I’m left slightly cold by the whole Aerin Lauder cosmetics “concept” (though, I admit I do love her homewares – someone needs to bring them to the UK STAT!), it’s all a bit wishy-washy “makeup for people who don’t really like makeup” for me, but the perfumes are nice in a Jo Malone-ish kind-of-a-way, and this particular balm is very much a winner.

What’ve you been wearing this week?

This post: Finishing Touches: LipsNspritz of the Week 8th July 2016 originated at: Get Lippie All rights reserved. If you are not reading this post at Get Lippie, then th