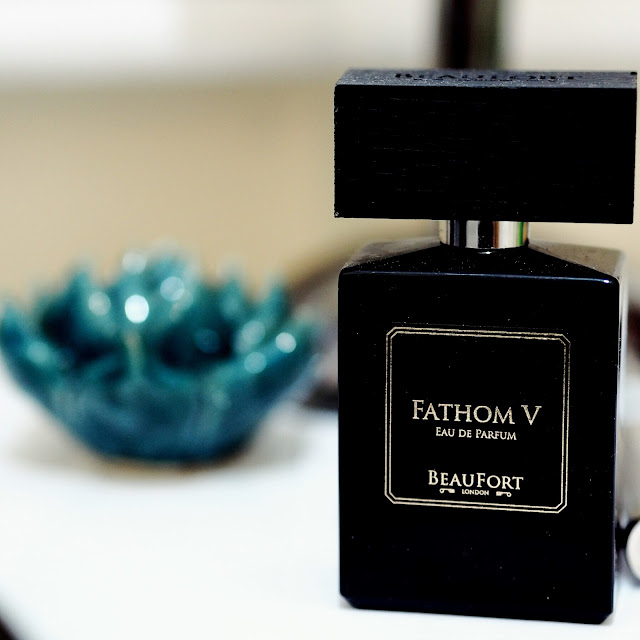 I confess, I’m sat here at my keyboard with literally no idea of what I’m about to write, so if this “review” of Beaufort London Fathom V makes even less sense than usual, you’ll know why.

First things first, since losing my sense of smell nearly three years ago, and being still deep in the recovery phase from parosmia (where everything I smell is distorted to a greater or lesser degree), I have to confess that I really miss the smells of nature, the good, the bad and the ugly.  I’ve cried twice in the last three years on smelling particular fragrances (once on smelling Sel Marin by James Heeley, which is about as photorealistic a treatise on the salty smell of the seashore I’ve ever encountered, and the other on smelling a saffron fragrance that made me realise my synaesthesia hadn’t disappeared entirely), and this, the salty smell of a rockpool suffocating with slowly drying seaweed at dawn also makes me a little emotional in similar ways.

Beaufort London make extremely uncompromising fragrances which are always unexpected, and it must be admitted that this can make them very challenging to wear, but I’ve worn Fathom V a few times now, and I love it a great deal.  It’s the greenest fragrance I’ve encountered; to the extent that MrLippie has exclaimed “that’s VERY green!” when I’ve just sprayed it in a different room to him (he normally has three categories of smell: “sweet”, “orangey”, and “strawberry”, which, bearing in mind I very rarely wear sweet OR fruity fragrances can make getting his opinion on things rather challenging when he’s acting as my “auxiliary nose*”), and he’s right.  It’s so very green that they might have to invent another category of green entirely just for this single fragrance.

It is green like the aforementioned drying seaweed, but also green like the stems of freshly bashed flowerstalks when you walk past a florist on the high street, and green like the greenest kale smoothie you can imagine, and as a result, it’s a bit like everything green in nature has blended itself into some huge (hopefully friendly) green monster and come up to smack you one in the face with a soft yet huge green fist in a, you know, good way.  It’s also salty and woody, and, strangely, earthy, like the roots of a plant you’ve just dug up. Think of crushed sap and mud, on the edge of a wooden-handled metal spade you’re using at the seaside and you won’t be far wrong.

I grew up in an inland (river and canal) port-town and Beaufort London Fathom V inspires in me a longing for a home that doesn’t exist any more, which in fact has never really existed anywhere except the inside of my head, and as a result it makes me long for places and times that would be impossible to get to any more, even if they were real. Can you be homesick for a place you’ve never been? Fathom V is the concentrated and distilled smell of the British coastline, natural and raw and blunt and untamed, and it’s just plain sublime.

It’s one of the most amazing smells I’ve ever encountered, I’m just not entirely sure it’s actually a perfume.  In candle, or room scent form, I can imagine this is fantastic, and I’d welcome my house smelling this amazing way.  On my skin though, it makes me tearful for a time and a place that I’ve only ever imagined.  A frankly astonishing feat, especially when you remember I haven’t smelled anything resembling “home” for years.

You can, and should, buy Beaufort London Fathom V here.

*All anosmics have a partner/ who acts as an external sense of smell, normally checking for the less pleasant aspects of life with a corrupted olfactory system.  BO, that random smell in the back of the fridge, burning toast etc

This post: Beaufort London Fathom V Fragrance Review originated at: Get Lippie All rights reserved. If you are not reading this post at Get Lippie, then this content has been stolen by a scraper