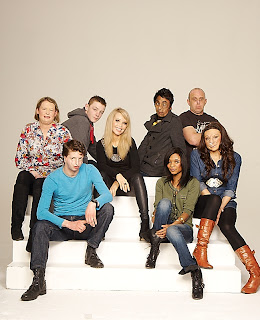 I was approached to write this piece, and it’s a little different to what I’d normally put on here – it’s certainly a lot more personal, for which I apologise in advance – so I do hope people won’t mind too much.

On Tuesday evening, I sat and watched the Channel Four TV show Katie: My Beautiful Friends and found it extraordinary. Normally, I find TV shows about disfigurement exceptionally difficult to watch, and I very deliberately avoided watching Katie: My Beautiful Face (which was the precursor to this show) a Cutting Edge documentary shown in 2009 about Katie Piper’s recovery from being attacked with sulphuric acid by a man she met on Facebook, as I knew I would find it painful.

Let me tell you why.

My problem – if you can call it that, I suspect that it’s more a form of “over-identification”, as you shall see – with TV programmes like this stems from my own – very minor – experience of disfigurement.  I was never what you would call a pretty child: pudgy, verging on ginger, and I had a gap between my two front teeth you could park a bicycle in.  When I was five, I went to bed perfectly normal, and woke up with strabismus.  Essentially I went cross-eyed in my sleep, which is pretty rare to happen so suddenly, especially when you wake up so severely cross-eyed that only the white of the crossed eye is visible, which is was happened to me.

I had to undergo major eye surgery several times to correct it, and endured brain scans, blood tests, and vision tests many, many times during my childhood, as they were worried about brain tumours and cerebral palsy, amongst other – scarier – things.  In the mid-70’s, none of these tests were a minor undertaking (if you’ve ever seen the brain-scan scene in The Exorcist, it’s based – almost entirely – on the actual medical procedure of the time).  Quite where my mum found her resources of strength to deal with all this, I will never know.

My childhood wasn’t really a fun place.  Added to my gappy teeth, the pudginess, the nearly-gingerness, and the constant medical tests and surgery, I then had to endure a year or two of wearing eye-patches, and the adhesive on those things (no sexy black patches on elastic for this kid, no!  Industrial strength Elastoplast all the way, baby!) ripped my eyebrow out, every single time.  So, I was a one-eyebrowed, cross-eyed, chubby ginger child with teeth pointing both east and west, usually to be found wearing smeary pink NHS glasses.  I still have nightmares about those glasses to this day.

I was not popular.  I was not cool.  And I was bullied, unmercifully all the way through school, even after the eyepatch disappeared.  Possibly unsurprisingly, as I was also rather unpleasant.  Whiny, needy, and something of a smart-alec (some things never change).  I was rather isolated, and convinced I was horrific to behold – so I separated myself from people.  Usually via sarcasm (as I said, some things never change), but normally just by being by myself. I read a lot, and wasn’t really good in groups of other kids.  Still not, as it happens.  Anyhoo.

I remember, on a family holiday not long after my first surgery, hearing my mother say to one of the holiday camp photographers (we were at Butlins and they followed you everywhere back then) not to take pictures of me as she was “ashamed” to see them. Once in a while she’d yell “no pictures!” if anyone else tried to take a picture too.  Even now, Mum will still make jokes about how terrible I looked back then, and the word hideous is usually used. It still hurts, the fact that my mother thought she couldn’t look at me, even when my realistically, my “disfigurement” was very minor, and, as it turned out, purely temporary.  It wasn’t quick though, I didn’t really grow into my looks until I hit my late teens, and I have days where I’m still not sure I have.

I still don’t like having my photograph taken to this day, and I can never ever take a compliment seriously – these things stay with you.  I am less than I look.  Or, rather, I feel that I am less than I look. Objectively, these days, I’m a perfectly ordinary-looking woman, but there has ever been a little corner of me that is still that ugly and unloved little mite, and I carry her everywhere with me.  My little blog about “beauty” is partially a response to that, I guess.

I, myself, may never be a “beauty”, but there’s always the hope, every new cosmetic release, that there’s something that might help lay the ghost of my five year old self to rest.  I think I use skin cream in the hope that I’ll suddenly wake up “beautiful” or even just plain “pretty”, instead of the “merely passable” being I see in the mirror every morning. These last few paragraphs have been the single hardest thing I’ve ever written for Get Lippie, and it’s possible it makes no sense as a result – or worse, makes me look like an idiot. Or both! But, I’ll take my chances, I think.

Because, my experience is nothing, literally nothing compared to some of the stories on display Tuesday evening, particularly the story of Chantelle and her AVM – a condition which causes blood vessels to expand uncontrollably, and because it is Chantelle’s nose that is affected, her condition threatens her life.  Such a beautiful – in all senses of the word – girl, unable to hide her affliction, and dealing with everything that life had to throw at her, including the break-up of her marriage on the eve of her life-saving operation.  Katie Piper, too, dealing with finding out about her attacker’s appeal against his life sentence with such dignity and grace, these women were strong, graceful and inspirational.

Having watched the programme in full, I feel a bit ashamed of my tale further up this post, it’s such a little thing compared to some of the situations some people go through in their lives, but I know that even small things like those can leave a lasting impression, and I know too that my little blog makes a difference to some people’s lives from the emails I get from my readers.  Cosmetics, whilst seemingly frivolous, are a serious matter for some people, which is why I’m here, still blogging away.  And, whilst I may still upon occasion complain about my looks, as a result of this show, I’ll be thinking about how I relate to my face somewhat differently.

I’m glad I watched.  Looking beyond someone’s appearance (even our own) is difficult, and the programme taught me I can face up to my own issues, and I’m grateful for that.  I’m nothing like as brave as Katie or Chantelle, and I’m very glad I haven’t had reason to be, and that is a lesson I’m glad to have learned.  That Katie has turned around her tragic experience and it’s made her reach out to people similarly affected is astonishing – the show is following her life as she sets up the Katie Piper Foundation, which aims to set up communities in order to support people similarly affected – and the fact that she’s such a lovely, unpretentious and warm girl made the programme feel like a real slice of a life shared, and that’s been a real inspiration.

Thank you, Katie.  I shall now watch My Beautiful Face, and really put my issues in order.

Watch the first episode here on C4 on demand and tune into the next episodes every Tuesday at 9pm on C4.

The Fine Print: This has been a sponsored post, however, I shall donate part of my fee to The Katie Piper Foundation.

38 thoughts on “Katie: My Beautiful Friends.”