I haven’t written about MAC since July 2010, when the “controversy” about their Rodarte collection which was eventually pulled from the shelves, was raging. 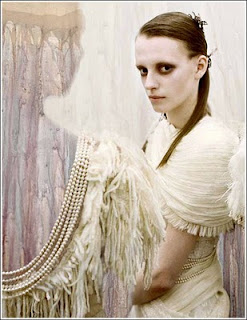 Since then, whilst I have, in fact, picked up the odd piece from a collection or two, I haven’t really got excited about anything, and I just haven’t been bothered enough about what I have bought to blog about them.

And why is that?  Well, increasingly, it seems, that by the time the stuff is out on the shelves, MAC have already moved on, and released their next collection. So blogging about the things you buy is almost entirely irrelevant, owing to everything being limited edition, and therefore, your posts are already out of date on the first day of release, as the products will have sold out already …

Annoying.  Add to this that MAC do fifty five collaborations a year.  That is FIFTY FIVE collaborations a year, more than one per week, and it’s almost entirely impossible for people to keep up with what they’re doing.  Then add to this that they’re constantly  – it seems – withdrawing basic staples, and then randomly releasing them in ever-more limited editions making it impossible to know from one week to the next if that lipstick you bought a few months ago is in stock or not. Or even still exists or not.

It all makes me feel like they’re too trendy for me.  I don’t really care about fashion, and I care even less about trends (it’s all I can do to keep up with the changes in the weather, to be honest), and, if I don’t know if a brand will be carrying the products I do want to buy from one week to the next, well, what’s the point of me going to the shop in the first place?  Especially if I’m only going to get sneered at by the sales assistants for daring to be in there asking where on earth the “Behold” eyeshadow is.  I’m definitely not trendy enough for a MAC store, these days, being all, like over forty, and dressed like an accountant and that.

Plus, it seems to me that the quality of the products doesn’t seem to be increasing with their prices.  When I started buying MAC, the eyeshadow singles cost £8 or so – a high price, but not unreasonable.  Now, they’re £12, which is a fifty percent increase in  price over the last ten years.  These are high-end prices, for what I’ve always really thought of as a mid-range brand, to be honest. And I still think the quality of the products is rather middling (not to mention variable) for the price.

And now … now they’ve moved into selling cosmetics in China, which means that they’ve had to re-introduce animal testing.  MAC are keen to let people know that the products they sell in the US and the UK will not be tested on animals, that only products sold in China will be tested, but this doesn’t alter that they’re going back on one of their major plus-points.  I’ve always happily recommended MAC to my vegan friends, knowing they’re about the best animal-friendly brands out there, but now, no more alas.

Does any of this mean I don’t like MAC anymore?  Actually, no.  I first really got interested in makeup through MAC, some of the tips and tricks I’ve learned came from MAC artists – who are, it must be said some of the best-trained in the business, when they’re not ignoring accountants in Selfridges, that is – and I still think that some of their basics are some of the best in the business.  If I open my train case on any given day, there are more eyeshadows from MAC in there than there are from any other brand, but I just don’t care about them any more.