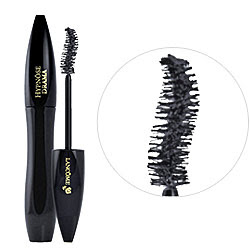 I am a massive fan of Hypnose, I’ve used it constantly for years. Well, I say constantly, I’ve had occasional flirtations with Max Factor, and Benefit Bad Gal once in a while, but I always come back to Hypnose. I found it’s lengthening and fattening properties to be second to none.

But … I’ve always liked the original Hypnose, Lancome attempted to improve the original a couple of years back with an “Onyx” version, which I really didn’t like at all. It was supposed to sparkle, and leave your lashes glossy with a shine that was meant to be visible to all. It didn’t do any of those things, that I could see. It was just a slightly runnier version of the original formulation, and it dried out very quickly after only a few uses.

So, when I discovered Lancome had reformulated yet again, I was exceedingly sceptical, especially when I noticed it has a curved brush. I am notoriously cack-handed at the best of times, and to be honest, I’ve never really seen the point of these curved brushes. But I gave it a go anyway …

And, I’m very glad I did, setting aside that I still don’t entirely see the point of the curved brush, it’s a very good update to the formula. It lengthens, and thickens even better than the original formulation, and, most importantly, it lasts better too. Some of my friends complained that the original used to flake, I never had that problem, but it didn’t wear well much after about six or seven hours on me, I used to notice.

The Orange-Faced Lady on the Lancome counter said you could layer up to 12 coats, but I think that way madness lies. I notice a massive difference after just one coat, and two coats is more than enough for anyone, I would have thought.

So all in all, this is an excellent addition to the already superlative mascara range from Lancome, I’m a complete convert.