I’ll be honest here, I’ve not bought a Maybelline product in years and years and years and years, not since I tried Great Lash and discovered it to actually be “Defiantly Average Lash”!  I do still wonder why and how this spectacularly nondescript mascara has as massive a cult reputation as it does, but I’m digressing slightly.

There’s been a lot of Maybelline love on the blogosphere lately, and I admit, it’s made me actually look at the products a bit – which is more than I’ve done in quite some time, it’s one of those brands that very rarely, if ever particularly impinges on my consciousness for some reason! However, one of the Colour Sensational lipsticks has been haunting me for a while, I swatched it a month or two ago, and I’ve been debating with myself whether to buy it or not.  I finally gave in last week, and I’m glad I did. 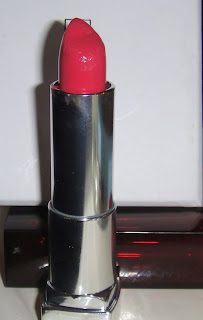 For some reason, it’s been packaged with the reds, but it’s actually more of a soft pink, bright, but not not too blue-based.  The reason it’s been on my mind a lot is because the shade is actually a dead-ringer for my All-Time Favourite Lipstick of All-Time: Chanel’s India.  India was a limited edition shade, and my various attempts to replace it over the years have all ended in abject failure but, as replacements go, this one’s a winner.

Here’s how it looks on my lips:

Although it’s bright, it’s actually a very wearable shade.  It’s not at all bubble-gummy, and as it’s not fuschia, it barely harks back to the 80’s at all!  It’s a bit greasier on the lips than the Chanel, so the wear isn’t the greatest (this stuff loves coffee cups!) but it does last a good few hours before you need to totally reapply.  It fades evenly without leaving lips ringed or dry.

I’m glad I picked this one up, I’ve worn it every day since I bought it, and I love it.  Slightly easier to wear than red, but more of a statement than nude lips, it goes with a variety of makeup looks.

7 thoughts on “Lip of the Day – Maybelline 540 Hollywood Red”