Now, I don’t know about you, but I find the thought of trying out a new hair salon pretty terrifying, I’ve been known to hang around outside salons for ages trying to pluck up the courage to actually walk in and make an appointment!   As a result, it’s entirely possible I don’t visit the hairdresser as often as I might.

Now, when you consider that I have crazy hair: 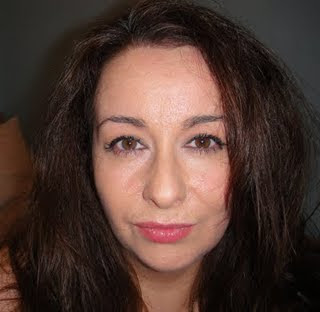 that might seem a bit short-sighted, but … I’ve learned my coping strategies over the years, I don’t wash it every day, I use my straighteners once or twice a week, and when all else fails, I tie it back. Wash and go hair just isn’t something that is possible for a curly-girl like me.

Or so I thought.

When the opportunity came up to visit Zoltan Vargyai at Compton’s Covent Garden salon and try out the next generation of Brazilian keratin treatment I nearly bit someone’s hand off in my eagerness to say yes! Keratin treatments, also known as a three month blowdry, have been around for a while now. They semi-permanently straighten and condition your hair, so making it easier and quicker to style.  Unlike a Yuko treatment however, the straightening effect fades over a number of months, so they’re cheaper, but also unlike Yuko, Onix can be used on colour-treated and/or damaged hair.

Previously, keratin treatments have had the major disadvantage that you have to leave your hair unwashed, untouched and unstyled (literally, you can’t even tuck it behind your ears!) for at least three days after having the product applied, but the new Onix treatment renders that obsolete, meaning that you can wash your hair the same day, if you want, and you can style your hair however you want without worrying that your hair will “set” into a new, and unwanted shape. Plus, the treatment can be done in about an hour, if you’re lucky!  I have a LOT of hair though, so I was in the salon a fair bit longer than that …

I spent yesterday afternoon having the process done.  The Compton Hair salon itself is very relaxed, all the staff went well out of their way to make me feel at home, and Tom – who actually carried out my treatment – was, I have to say, utterly adorable.  We spent a long time chatting about my hair, and what I wanted from the treatment, before we got started and the chat continued throughout, so much so, I barely had to pick up my book! There was also a bit of an iPhone application face-off at one point, but I shall gloss over that, I have the least cool selection of Apps, ever.  I also had a chance to speak to Zoltan himself, but I’ll bring you more about that in a later post.

The treatment itself isn’t that complicated, your hair is washed twice with a special clarifying shampoo to open the hair cuticles, then the keratin treatment is applied and left to absorb into your hair. Your hair is then dried and straighteners are used to set it into it’s finished style.  Here’s how my hair looked at this stage: 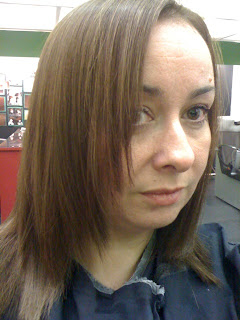 Apologies for the poor quality of the iPhone picture there!  Now, if you wish, you can leave the salon at this point, and leave the keratin on your hair for a couple of days before washing it out, or you can leave it on for another 45 minutes and have it neutralised and removed at the salon.  I opted for this version of the treatment – I’m an instant gratification kind of gal, always have been! Once the keratin was removed, my hair was very roughly blowdried with fingers, NO styling products, brushes or straighteners were used at this point, and here’s how it looked when I got home after a slightly rainy walk through Covent Garden: 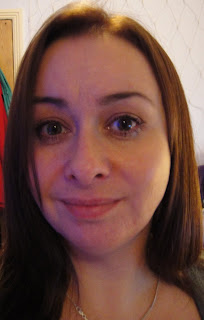 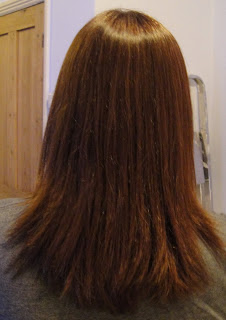 Lookit that shine!  (Don’t lookit the stupid expression on my face …) Ordinarily after a few minutes in a damp atmosphere I resemble a dandelion clock after a particularly vicious static storm, or Marc Bolan after a nasty electric shock, so just to get away with a little light fuzzing at the ends is amazing. Especially after only five minutes under the hairdryer! Normally getting my hair this straight is about an hour-long job, and it’s back-breaking, to boot.

I can’t wait to try styling this myself, I specifically requested that Tom leave me with a little root lift, so when it dries naturally it’ll be a bit more “bouncy” than it appears here.  I was delighted with my experience in the salon today, seriously, they’re lovely people! And I absolutely love the results I’ve been left with so far.  I’ll bring you a further post a little later in the week about how I’ve found dealing with it at home, I think the key part of any salon treatment is how your hair behaves once you try to replicate the results yourself!

It’s important that you use an SLS-free shampoo and conditioner after the treatment, as sulfates strip away the keratin treatment, so I purchased the Onix products to ensure I get the best results, and I’ll let you know my thoughts on those too.

You can find out more about Compton Hair here and more about the Brazilian blowdry itself here. Prices start from £145, and the treatment can take from 1 to 4 hours depending on the length and thickness of your hair.  If you do go, ask for Tom, and tell him I said hello!

The Small Print: This treatment was provided free for review purposes.  All reviews are honest, regardless of the source of the product.