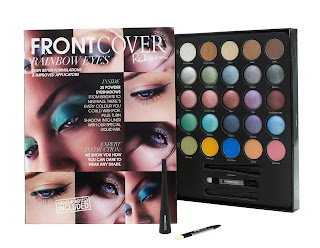 I know a lot of people really like Frontcover boxes, which are available at Boots. A little bird has told me that they’re re-releasing their infamous Rainbow box of eyeshadow shades on 25th February.  Originally released for Christmas 2008, they were a sell-out and quickly became a cult item. Boxes contain 25 shadows, applicators and a “Shadowline” which turns any eyeshadow into a liquid liner.

The boxes will be available for £15 until 23rd March when the price will increase to the RRP of £30. Will you be getting one?