I’m a massive fan of Lancôme mascaras, and have been ever since they first introduced the Hypnôse range! I always have one on the go, and one as a back up around.

Despite the occasional misfire – Hypnôse Onyx anyone? Seriously I thought that one was innovation purely for innovations sake, it was literally no different to the original formula – they’ve always been my “go-to” mascara brand, as well as being the standard I judge other mascaras by.

Discovering that Lancôme had yet another version out at the end of this month, and that there is a waiting list for it at Harrods, I – on your behalf, lovely readers – begged, pleaded, cajoled, threatened, and just basically harassed the bejebus out of Lancôme till they sent me one to try.

(Actually, none of that is true, I merely cried at them till they gave me one to shut up and go away)

I’m glad to say that I’m a big fan of this one.  I loved the Hypnôse Drama formulation, but found the curvy brush a bit of a trial. Being the cack-handed muppet that I am, a thick curvy brush is not my friend, especially not first thing in the morning …

Anyhow, the new brush irons out those wrinkles, being flat, and having short bristles on two sides, alongside longer bristles on the other sides (see illustration) 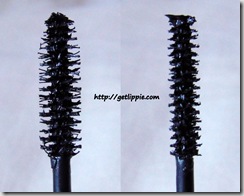 What this means is that I can pack on the mascara with the shorter side, then use the longer bristles to tease out my lashes, all just by turning the brush through 90 degrees! So simple, even a cack-handed muppet can use it. You get the benefits here of both a thin, and a thick brush, meaning you can use it whichever way suits you.

Here’s how it looks on my eyes: 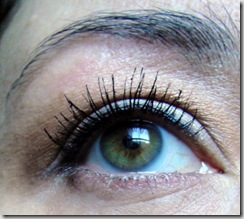 Now, I’ll be honest, it doesn’t – quite – give the full-on false-lash effect I love so much – though it’s pretty darn close – but I do actually have high hopes for this little tube.  And this is because this is Lancôme’s first mascara to incorporate both skin, and haircare, technology into their formulation.  It is, in effect, an anti-ageing mascara.

Yes, I am aware of how silly that sounds, thank you. There are, however,  a few mascaras around making similar claims at the moment, but they’re all two-stage systems, Hypnôse is the first that does it in one step, with no fussy serums, and no two brushes first thing in the morning!

Here’s what Lancôme themselves have to say:

From 28 days, the formula enriched with our patented Lash Densifier Complex helps regenerate lash condition. With a visibly denser looking fringe, lashes appear longer, as though regenerated. Each day, Hypnôse Precious Cells helps you to reveal your lash potential.

I’ve been using the formula for two weeks now, and I’ve yet to see any particular difference in my lashes, but Lancome claim that this will stop my lashes falling out as often– something I’ll be delighted with, if it happens. I have much thicker lashes on my right eye, and much longer lashes on my left, and if this mascara helps even things out, I will love it for ever and ever, and ever, and ever … I’ll report back in a couple of weeks.

Lancôme Precious Cells will be available from Harrods on 28th March, nationwide from 1st May, and will cost £22.  Will you be investing?

The Small Print: I was sent this to review.  All opinions are honest, regardless of the source. No one reads these do they?  Hugh Jackman, naked! Told you.