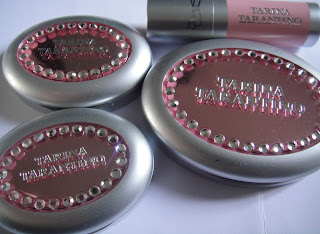 These little pretties arrived courtesy of the international mail on Friday, and how gorgeous are they?  I owe the gorgeous Paula at Older Girl Beauty a massive thank you for sorting out a gorgeous delivery for me!

The pic on the left shows two eyeshadows (in headband and brooch) a blush (in feather) and a lipstick in cameo.  Tarina also designs jewellery, and as you can see, a lot of thought has gone into designing the outside of this range.

But, do the insides measure up?  Swatches after the jump.

Here’s how the colours look in the pan – I deliberately picked neutrals as I wasn’t sure what the coloured items were going to be like: 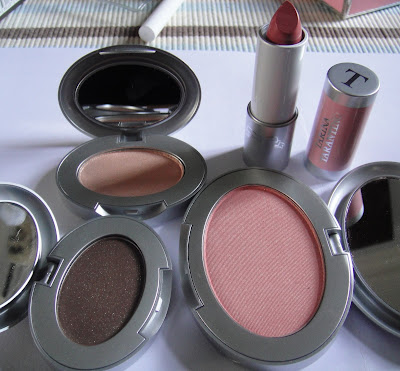 Clockwise from bottom left, Brooch, Headband, Cameo and Feather. They’re all very pretty, but … it has to be said, the quality doesn’t quite match up to the packaging. Here’s how they swatch: 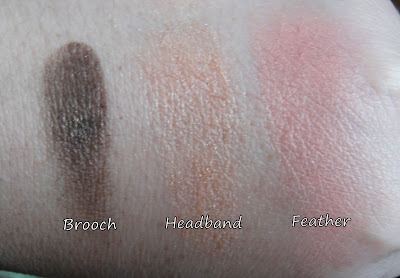 Note, these are swatched pretty heavily, and they’re nice … but, they’re not as pigmented as I would like.  In fact the blush is probably the most pigmented of the three.  Headband (middle) has been swatched about four or five times, it’s exceptionally sheer, but it is a very pretty, slightly glittery shade apricot shade.  Brooch is a true brown, which doesn’t appear to pull either red or orange, so that’s good, it’s a slightly less pigmented version of NARS Mekong on my skin.  Feather is really very pretty peachy-pink shade. 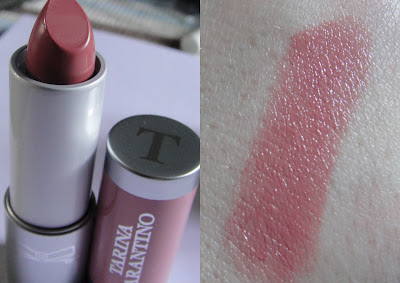 I have to admit that this is a lovely lipstick, and the packaging is very definitely done well, there’s a satisfying “click” when the lid slides into position. Very hydrating, this is a very lovely “my lips but better” shade.

However, I realised I already own this colour almost as soon as it arrived (and I only noticed it because I happened to have the other two in my makeup bag already!): 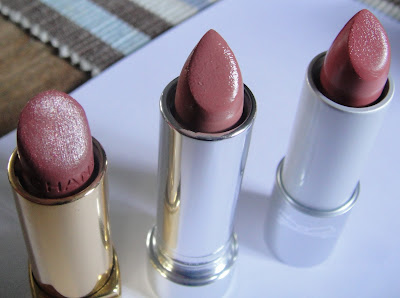 L-R Chanel Incognito, Becca Giselle, Tarina Tarantino Cameo.  Just as well, I love this shade!  Here’s how they all swatch – they do look more different out of the tube than in it: 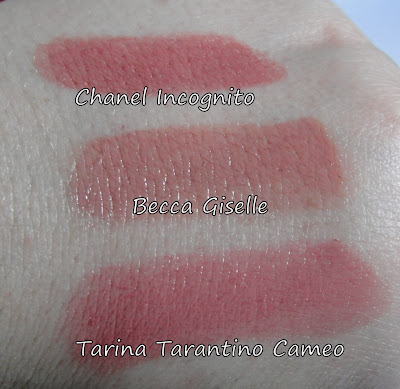 Incognito and Cameo are both on the pinker side, though Cameo is sheerer, and Giselle is more beige than either. These shades are about as nude as I can go though, any paler and I look like death warmed up.

What do you think, does a beautiful exterior allow you to overlook slightly underwhelming contents?  Do you own multiple versions of the same shade?