I’ve been a bit obsessed with hair this year, I can’t deny it. I’ve had four visits to different salons since Christmas (which is at least three more than usual, I’m notorious for leaving it far too long between visits), and, hand on heart, there’s only one of them I’d definitely go back to.  And that is this one.

I was invited along for a pre-birthday hair makeover by the Andrew Barton team last week – in spite of all my other salon visits recently, it can’t be denied that I’ve been in a bit of a hair rut the last year or two – and I was delighted to pop along to see what they could do.  If the name seems familiar to you, that will be because Andrew Barton himself is the hair stylist responsible for those amazing transformations you see on Ten Years Younger.  Unfortunately, Andrew wasn’t available on the day of my visit, but I was left in the more than capable hands of Tracey and Declan, and neither myself nor my hair have any complaints about it!

The salon itself is monochromatically decorated, with hints of wit – have to say I adored the flock wallpaper with the dog silhouettes all over it –  being a fan of the monochrome, I felt right at home! I found the salon quite restful, and it was nice to have a little respite from the pounding dance music that a lot of salons pour into your ears in order to make your visit appear cool’n’trendy.  Prior to my appointment, I’d attended a consultation with Declan and had a colour test (the salon only uses Redken products, and I hadn’t had a colour with Redken products for a while) to ensure I wasn’t allergic to anything.  Declan and I had a good chat about the state of my hair (back to it’s usual insanity), and my attitude towards styling (non-existant). Declan took all of this in his stride, and suggested a style that works with my hairs own natural tendencies, and also discussed some colouring options.

On the day itself, I was delighted to be recognised by other staff members who I’d chatted to briefly during my consultation visit, and was gratified to see that Declan, my stylist, and Tracey, my colourist, (who hadn’t been available on the consult day) had obviously chatted about my requirements in the meantime – or if they hadn’t, they were remarkably in tune with one another! – we decided to not change my colour too drastically, but even up the ends and the roots, and add in a few subtle highlights to break up the colour around the front.  There was nothing drastically wrong with the colour as previously done, but I’d been aware that my hair was looking rather “block-y” and heavy recently, and I wanted to add some movement.  Both Tracey and Declan got what I was trying to explain right away, and I have to say that they are both extremely talented at taking some vague, mumbled instructions about “boringness” and “heaviness” and taking on board both appropriateness for lifestyle, and appearance, and turning that into a hairstyle.

Staff were friendly, professional, and very easy to chat to, there was no pretentiousness, snootiness or patronising of the clients, all things other salons are occasionally guilty of (sometimes all three in one go, with an added side order of rubbishness. I’m naming no names, but this post might remind you of how annoying any and all of those things are).  It’s the small touches that make a salon friendly, and re-visitable, and the Andrew Barton salon has these in spades.  Everyone took a turn in manning reception, anyone and everyone offered to make drinks, and I noticed all of the team taking their turn in cleaning up after themselves too, it was nice not to see a stressed out “junior” doing all the donkey-work.  Most importantly, these guys seem like a team, one who genuinely enjoy working together and, after a few disappointing and/or stressful visits to salons this year, it was a refreshing delight to see and be part of. 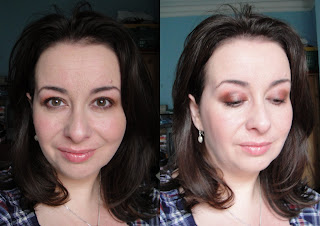 As for my hair, well, I love it. It’s a bit darker than I anticipated (considering I had highlights!), and a little shorter than I was expecting after the consult, but both the cut and the colour work very well, it’s very shiny, and just it feels so much lighter and bouncier, it’s almost like a new head of hair! It’s garnered lots of compliments, so, sometimes, I guess it’s okay to just trust the stylist. You just need to pick your stylist carefully …

Andrew Barton isn’t a cheap salon – although considering the location, it’s reasonable in context. Colour services start from £60 and go up to around £170 dependent on both the service requested, and the technical level of your stylist.  Ask for Tracey and Declan, tell them I said hello.  And warn them that I’ll be back.

The Fine Print: Service was provided free of charge as a pre-birthday review opportunity. I’ll pay next time though, you betcha.  And I’ll be stealing that wallpaper. And possibly one of the backwash chairs. All pictures in this post – aside from the one of my ugly mug – were shamelessly stolen from the Andrew Barton website.