MAC Rodarte Collection – but it is art? 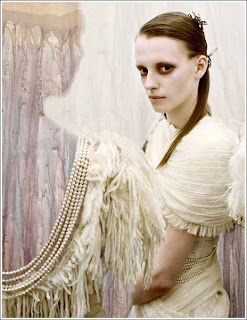 You’re going to be reading a lot of posts on this matter this evening, and I just thought I’d add my tuppenorth into the matter.  The new MAC collaboration with Rodarte is due out (in the US) in September.  A collection of ethereal pale greys, pinks and taupes, it’s meant to be inspired by the beauty of the countryside in Mexico, and specificially, items (according to Rodarte) were inspired by the female workers “floating to work” in the factories at dawn.

So far, not so unusual, but several of the items may have been insensitively named: Juarez, and Factory, are the nail polishes in the collection, and here’s where the controversy begins, for, over the last several years, women in their dozens have been abducted on their way to work in the factories of Juarez, and they have been raped and murdered. Juarez is a notoriously impoverished factory town, and has been named one of the most dangerous places to live in the world as a result of these abductions, murders and rapes.  Very little is being done by the police to investigate the situation, as the women (aged between 12 and 20, in the main) are every poor, and it’s not seen as worthwhile to try and bring their rapists and murderers to justice.

After an outcry in the US, MAC have released a statement announcing that they are aware that some people consider these names controversial and/or offensive, and, as a result, they are going to donate a “portion” of the proceeds of this collection to the people of Juarez.  Rodarte themselves have merely said that the names of the collection were inspired by their “travels”, and have not apologised for the controversial element.

This strikes me as a shame, and a missed opportunity.  Why not release the entire collection as an awareness raising one, and donate the entire proceeds to the people of Juarez? MAC, of course, have a track record in this area, donating as they do, the entire proceeds of their Viva Glam releases every year to Aids charities.  I’d feel a lot less uneasy about MAC if they’d done this, I’ll be honest.

Can you imagine if, in the UK for example, Illamasqua had released a collection with an item named “Soham” and then claimed it was simply because the town was so beautiful, and that was the only reason they chose the name?  It shows a massive amount of naivety on the behalf of the Rodarte team that they didn’t consider the implications of naming parts of a collection this way, and ignoring any offence they may have caused too.

Please be aware that I am NOT calling for a boycott of this collection, and if you want to buy the items, you are, of course, welcome to (personally, some of the items I’ve seen, I think to be very pretty, in all actuality – it’s certainly not a collection for our darker skinned sisters, judging from the promos though), but I’d like to see MAC do more to redress this situation, (what proportion of the proceeds are they willing to donate, for example) and I’d like to see more in the way of action from the Rodarte team to acknowledge the situation too.  Makeup shouldn’t, if you ask me, be glorifying the rape and murder of women …

What say you?  Legitimate outcry, or storm in a teacup?

15 thoughts on “MAC Rodarte Collection – but it is art?”