Recently, I was invited along to the Trish McEvoy counter at Selfridges to take a look over some of the products that they stock that won’t fit in my planner.  In case you don’t know much about Trish’s range, she’s a US makeup artist, who is famous (infamous?) for her compact (and bijou!) makeup planners.  Mine must be about six years old now, and contains a face powder, a blush, a highlighter duo, and four eyeshadows. Over the years it’s proved to be a great boon, particularly for travelling.  The thing I like about the planners is that you pick the colours, and contents yourself, according to your needs.  Mine is full of pinks, purples, and browns, and I love it.  I’ll show it to you, one day.  Once it’s full … which might be soon …

I hadn’t realised – it’s been a while since I stopped by the counter – that there was a full range of skincare.  This isn’t a reflection on the skincare, btw, but I’m a magpie-shopper, and my attention is always drawn to the jewel-like shades of the eyeshadows before anything else!  I was especially drawn to a pot of Beta-Hydroxy pads which promise to help you resurface your skin – something I’m almost literally obsessed with at the moment, thanks to a surprise birthday present that I’ll be reviewing for you soon – and a balm which promises 8hr Cream-like results without the, ah, “liniment”-like scent.

After a long chat, and a nice cup of tea, I was sent away with a couple of samples to try, and you can see them above, (top to bottom) High Volume Mascara in Jet Black, Eye Base Essentials in Demure, and a 24 Hour Eye Shade pencil in Topaz.

First off, the mascara, this is a “tubing” mascara, something I’m always fond of because they don’t flake or run during the day, and you only need a little hot water to remove it.  It’s a bit scary the first time you try and remove a tube mascara (basically you wet the lashes, and gently – very gently – roll the mascara off your lashes.  You’ll end up with fingertips full of tiny mascara tubes, which always look suspiciously like your eyelashes themselves though!  This mascara has a tiny brush head, barely any wider than the brush wand itself:

I like a small mascara brush, as it enables you to get really deep down into the roots of the lashes, without smearing mascara all over your lids and ruining your eyeshadow!  But the true test of a mascara for me is whether or not it both lengthens and thickens.  Here’s what it did for my lashes: 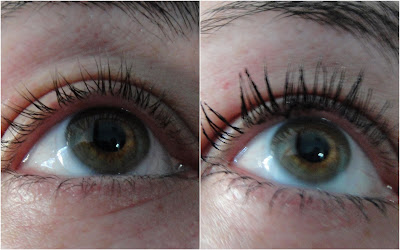 For some reason, these photos don’t entirely do the mascara justice, yes it doesn’t lengthen quite as much as my most recent mascara-love Le Metier Anamorphic, but it does volumise a lot more, giving, I think, a far more dramatic effect over all. I’ve used it every day since picking up my sample, and it’s been perfect in this hot weather, being impervious to heat, sweat and (to an extent) tears!  Love it.

Now for the eye base and the 24 hour shadow: 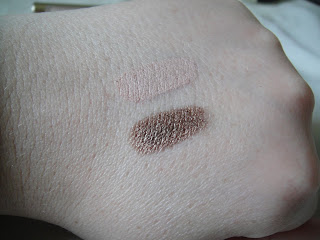 What I like about the Eyebase Essentials is that it comes in a selection of 8 shades, and a selection of finishes.  Shown above is Demure which is a rather cool-toned lightly pinked beige, with a faint sparkle, but there are peaches, and light taupes, all perfect as either skin-toned shadows in their own right, or they make a great base for your powder shadows.  I’ve noticed they don’t last quite as long as Urban Decay Primer Potion,  but they do give you a bit more slip, so they’re far, far easier to blend over.

The 24 Hour Shadow pencil in Topaz is a beauty, a multi-tonal bronze shade, you can either apply it heavily (as in the swatch) or sheer it out with your fingers or a brush after a quick sweep over your eyelids. After a few seconds, the shadow will “set” (you don’t have to work as quickly as with Ellis Faas, for example) and it will last.  A very long time.  The sheerer you make your application, the less time you’ll have before it creases, but I estimate that even then you’ll get a minimum of 6 hours crease and fade-free wear.  If you apply it more heavily, you’ll be wearing a perfect shadow look until you decide to take it off.  There are four colours in the range, and I’ll be heading back out for the grey one very soon.

The Fine Print: I own a fairly extensive collection of Trish McEvoy already, but the products featured in this review were supplied for review purposes.  Unless you consider tea a bribe, I wasn’t compensated in any way for this review.

It’s not, by the way.  A bribe, that is.  Even Selfridges tea isn’t that good.