A day with Daniel Sandler

Now, if you’re a regular reader, then it should be fairly well known by now that I adore Daniel Sandler. Having met him a few times this year, I’ve found him to be funny, friendly, down-to-earth and I’ve always found that time spent in his company is great fun, so when he invited me for a personal introduction to his makeup range recently, I found it to be an offer I couldn’t actually refuse … well, could you?

Popping along to his studio on Harrod’s fifth floor, I find that Daniel’s Hollywood-style makeup counter looks amazing, all mirrors and spotlights, and it’s a glamorous spot to sit a spell and have a natter about lipgloss with the man himself.  Initially there just to take a look at Daniel’s new collection of waterproof eyeliners, it’s a matter of mere moments before Daniel has decided that I’m to have a makeover.  Actually, I didn’t think I looked that bad beforehand to be honest!  But hey, the man knows what he’s doing, and I’m not one to turn down a makeover when one is offered, particularly when it’s offered so politely!

Discovering that Daniel and I first got into makeup at around the same age, and discovering that we were both influenced by the New Romantics (yes, I’m showing my age again, I know) was hilarious.  I had a Girl’s World when I was about ten, and the book was full of “piratical” makeup thanks to Adam and the Ants but I found it really difficult to re-create the looks with just a green and a blue crayon! Confessing this to Daniel, he told me that he spent a lot of time grinding down chalk to make pigments for the makeup for his school plays, and that this had given him a great lesson in how cosmetics are made, which he admits has given him a boost when it came time for him to create his own line.

I’d love to tell you more about what Daniel and I talked about, but alas, I’d made a fatal error on the day.  I took Mr Lippie along, and discovered that he and Daniel got along like a house on fire!  So much so, that I could barely get a word in edgeways between the two of them …honestly, I’m banning MrL from makeup events now, he makes me look totally socially inept at times, bless ‘im.

Daniel did make time to tell me a few snippets about Lulu, and he’s one of the very, very few makeup artists who’ve actually noticed that my eyes are actually different colours, which just shows how much attention the man pays when he’s doing your makeup!  He also mentioned that I have a similar complexion to Keira Knightly (yeah, right), and was very happy to discuss all his makeup inspirations – particularly when I pointed out that when you look at his collection, I personally found a few of the inspirations easy to spot – and it was refreshing to hear from him about the problems that go with trying to launch a makeup collection.  Particularly how frustrating it is when things don’t come out precisely as you want them to.  All really fascinating to anyone with even a passing interest in the beauty industry, and as a control freak myself (no, really), I had severe sympathy!

So, I’m guessing you’re wondering what a makeover with Daniel Sandler actually looks like, hmn?  Well, if you excuse the dopey looks on my face (sorry Daniel), here’s the finished article: 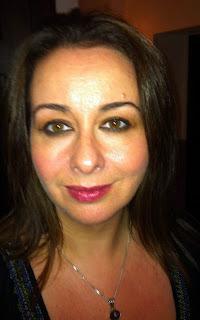 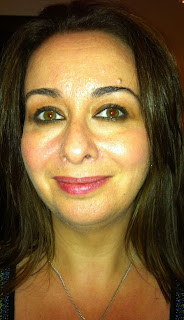 I came away with a brown smokey eye (complete with at least two different shades of eyeliner) and berry-stained lips. I don’t ordinarily use brown eyeshadow, for a variety of reasons, but I always like the effect when someone else picks it for me, and I adored the choice of berry lips to go with it.  I’d normally shy away from coloured lipstick with such a statement eye look but I thought this worked amazingly well. Maybe a little OTT for an evening spent on the sofa watching X Factor, but such is life …

I’ll be talking you through some of the range of products Daniel has tomorrow, but in the meantime, if you’re interested in a makeup lesson from Daniel, you can find the details here: Makeup Lesson with Daniel Sandler

The Fine Print: I was just there to look at the eyeliner, honest!

7 thoughts on “A day with Daniel Sandler”