Accountants need projects like fish need bicycles water.  This year, I’ve decided to set myself one, I have around fifty different projects going on at work so, what’s another one for home? 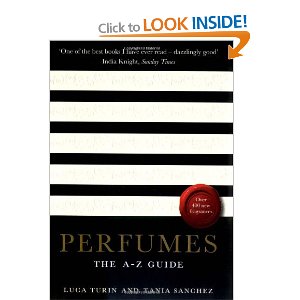 Over Christmas, I downloaded Perfumes: The A-Z Guide by Luca Turin onto my Kindle App (Santa ignored my repeated requests for a Kindle this year, I hate him), and spent a glorious day and a half reading about practically every perfume under the sun.  I also spent a lot of time bookmarking those perfumes I was really interested in having a sniff of.  It’s completely and utterly engrossing, and I learned a great deal reading it.

2010 was the year I really re-discovered perfume. After several years of avoiding buying it altogether, being disgusted with the proliferation of syrupy-sweet stinks that all smelled the same, I stuck to a few old favourites (Acqua di Parma, Jicky and Aromatics Elixir, in the main), and thought that there was nothing on the market to interest little old me.  I was wrong.

So, having spent last year discovering that there was perfume I like available, I’m going to spend some time this year, sniffing my way through the classics (and some not-so-classics – just because I love them) and see if I can educate my nose a bit more.  I spent some time before Christmas with some amazing perfumers, and I’ll be talking about those soon.

It turns out that when I’d been bookmarking the scents I was interested in, I’d picked out around 100 or so that I was really, really super interested in, so, being an accountant, I’ve created a spreadsheet (I even added a pivot table, deep joy!) and I’ll be tallying everything I’ve sniffed as the year goes on. I can manage two sniffs of new perfume a week, I’m sure.  I’ll even review them here … a bit.  Occasionally.  If, over the next 12 months, you see an anorak  accountant with a spangly pen frantically writing notes on random bits of paper in a perfume hall near you, then you’ll have spotted Get Lippie out in the wild … I’ll publish the list in full at a later date.

So, if money were no object what perfume would you buy for yourself?