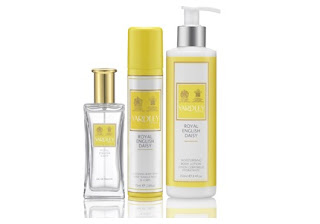 Ahhhh … Yardley.  It’s hardly the trendiest of perfume houses, and if you mention it to most people, they’ll sigh a little bit and mention how their grandmother used to wear Lily of the Valley talcum powder, or smell of English Lavender.

And, truth be known, it’s because Yardley aren’t the trendiest of perfume houses that they’ve been around for so long. Not reliant on advertising, and celebrity endorsements, they’re rather fashion-proof, which is all to the good. They’ve been the world’s premier producer of single floral scents for several hundred years now – being founded around the time of Charles I, and have been producing perfumes as the House of Yardley since the mid/late 1700’s.

I’ve  mentioned Lily of the Valley already, and English Lavender, which I suspect are their best-known scents – alongside English Rose – but they also have expanded their range in recent years and have added Peony, Iris and Orange Blossom to the basic scent range.

Last year, they also re-released their cult April Violets scent, which had been long sought after by perfume fans and had been changing hands for up to £100 a bottle on eBay.  Not bad for a scent that retails for less than a tenner in the first place!

I was delighted recently to be introduced to the range, and have found their single flower scents to be invaluable for helping me be able to identify individual notes in more complicated fragrances.  For, whilst Yardley fragrances are simple, they’re also well-rounded and “pretty” scents to wear.  They’re “linear” – meaning that the top notes are woven through the entire fragrance, and the dry down after a couple of hours or two won’t smell too different from the scent that you first spray on in the morning.

In particular I’ve found myself drawn to Orange Blossom, which is a lightly heady concoction of neroli on the top notes, tempered with a little sprightly clean musk underneath.  It’s calming and clean, and I find it’s wonderful for clearing my head and making me able to concentrate.

Iris is a pretty, powdery, softly grey scent.  A little more sophisticated than a lot of the other soliflores in the range, this does away with any “old lady” images the range might have.  I’d wear this one.  A lot.  And I will.

Peony.  This is PINK.  It’s sweet, and younger-seeming than the others.  A fun, uncomplicated and breezy scent, it’s perfect for weekends, and is unthreatening, and very easy to wear.  It’s not very me, but then, it’s not trying to be.

Yardley also recently introduced their first non-linear floral scent, called: Royal English Daisy, it’s a limited edition inspired by Kate Middleton, and her impending nuptials. I was slightly bemused by this idea, as the only thing daisies actually smell of is … well … dust.  Seriously, have a sniff of some chamomile tea sometime, it’s basically dust with a hint of sunshine.

However Royal English Daisy doesn’t, as far as my only-lightly-tutored nose can tell, contain any dusty daisies, it’s a bit of a green lettuce and apple explosion at first before gently subsiding into a sweet, lightly floral appley-hyacinth scent, with just the merest whisp of a pale sandalwood base.  It’s very pleasant, extremely inoffensive, and very easy to wear.  It’s perfect for a young girl just starting out on investigating perfume, but it’s nice and easy enough to wear that women of any age can wear it.  Realistically, it’s not my cup of (chamomile) tea, I prefer something headier, but I can see this one being very popular indeed.   Get your mum some for Mother’s Day.  She’ll love it.

The Fine Print: Reviews – such as they are! – were written from samples received at a PR event. No fudge was harmed in the writing of this post.