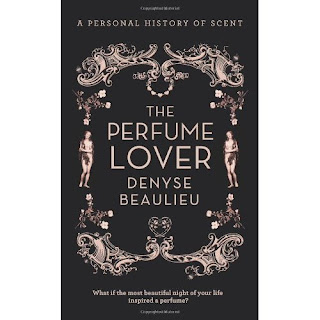 Fangirl disclosure: Denyse Beaulieu writes Grain de Musc, a blog I’ve read for years (though I’ve always been too shy to comment on it), and for the last year and a half I’ve been saving my pennies to go on Denyse’s highly-regarded “Perfume: Understanding Fragrance” course at London College of Fashion.

So, when the chance came up to review this book, I leapt at it. On Grain de Musc, Denyse writes both beautifully and lyrically about perfume, I admit freely that her blog has helped me form quite a few of my own opinions of fragrance – Serge Lutens’ in particular – and her style has helped me figure out what perfume-writing can aspire to.  She is, in many ways, a blogging inspiration.

The Perfume Lover is a triple bill, the story of the creation of a perfume, a partial history of Western (particularly French) perfume, and the story of a life lived in – and through – fragrance, all three strands interwoven through Denyse’s own, very particular, viewpoint.   It’s a fascinating book, but has a fundamental flaw which throws the brilliance of some sections all too much into stark relief, and ultimately makes the reading of the book somewhat … difficult.

Inspired by Denyse’s story of “the most beautiful night of my life”, which is  a sultry tale of an encounter with a beautiful man during Holy Week in Seville, whilst surrounded by orange blossoms and incense, perfumer Bertrand Duchafour (creator of a couple of my favourite scents of all time, Acqua Di Parma Colonia Assoluta and Commes des Garcons Avignon amongst many more) is inspired to try and paint a picture of that evening through fragrance.

The story of Bertrand and Denyse’s somewhat flirty and bantering relationship is genuinely interesting, and as a sketch of how a perfume is created, the book is exceptionally good, but we’re never really “invited in” to Duchaufour’s laboratory to observe the nitty-gritty of how it all happens.  Oddly, and especially so for someone at times over-keen to promote herself as both the “muse” and “co-creator” ofBertrand’s work, Denyse somewhat avoids describing the nuts-and-bolts of perfume creation – either because she isn’t interested in how it actually goes down, or wasn’t as intimately involved in the process as she lets on.  It’s hard to tell.

Where it really excels, however, is in the details of perfume itself, it’s a mix of travelogue and history, and is endlessly fascinating, if somewhat incomplete owing to the “personal history” nature of the text. However, I could have read five times as much of this than was in the book – Denyse has a way of bringing scent to life on the page in a way that’s both extremely engaging and is almost “photo-real” in the way you can almost smell the fragrances rising from the pages.  This is what Denyse is good at, and had the book been purely a history of fragrance and the inter-relationships between individual perfumes, their times, their places and importance in history, then there’s a better than good chance that this would have been one of the best books on perfume ever written.

Alas it’s not, and the reason for that is Denyse herself, I’m afraid.  At times, she seems to be so determined to be the most fascinating part of her narrative that I think she over-identifies with the title of the book, which could, in all honesty, be renamed The PerfuMe Lover, without it making any less sense in context.

There are times in the book where the narration goes overboard on the “I’m doing a sexy thing now” routine.  For example – she recounts a tale of how she had an affair with the mailman simply because she gets so many packages, and she devotes more than a small amount of attention to an affair with a shadowy “Monsieur” that she appears to enjoy purely because he’s rich and buys things for her.  These tales don’t always add to the narrative, and occasionally jolt you into wondering just why they are there, or if they are even true (quite a few of them have a more than tangible hint of pandering to a rather pedestrian hetero-male sexual fantasy), which disjoints the reading experience quite considerably.

And I can’t even begin to explain why either Denyse or her editor thought it was necessary to include a section that details precisely how the author fakes an orgasm – but it’s in there, just in case you were on the edge of your seat about it.

Imagine a Madonna impersonator coming around to your house and performing a ceaseless “bump and grind” routine in your face whilst you’re trying to read a good book. “The Perfume Lover” is a bit like that at times.

I think we all get that sex and fragrance are inextricably linked, and the sections of the book that are about just that inter-relationship (albeit the ones without the direct authorial experience of it) are fascinating, but, even though the book is described as a “personal history of scent”, there are long periods of it which are just too personal, and it’s to the detriment of the two other strands of the story, which deserve better, to be honest.

Overall, I learnt a lot about (certain) fragrances from the book – and I loved that.  I wish there had been more of it, and, further,  wish that there had been more from Duchafour and the other perfumers interviewed for the text, all of whom are presented in a rather disappointingly shallow fashion. Personally, I could have done with a lot less of Denyse’s rather distancing, and occasionally extremely distracting, “sexiness”.  I’ve found too, that after years of reading, rather enjoying (and *blogger confession alert* occasionally writing), women’s erotica, that I never want to hear about another woman’s knickers – or the contents thereof – ever again, so that’s nice.

However, I also discovered, via the sample vial that was sent alongside the book, that I simply adore the fragrance Bertrand Duchafour created during the writing of this book: Séville à l’Aube.  It is, quite frankly, stunningly beautiful, and,when it is released by L’Artisan Parfumeur in July, I shall be removing the funds I’d set aside for Denyse’s perfume course and buying a full-size bottle of Séville à l’Aube, instead, because it is already the
perfume I think I want to wear to my wedding.   Scratch that, it is the fragrance I’ll be wearing, and I can’t think of a higher compliment to pay to the genius of Duchafour’s creation than that.

The Perfume Lover by Denyse Beaulieu is released on March 15th, and is available to pre-order on Amazon.

2 thoughts on “Book Review – The Perfume Lover by Denyse Beaulieu”