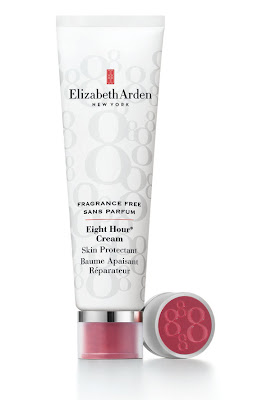 I still have the first tube of Elizabeth Arden 8 Hour Cream that I ever bought, there’s still some left, and it’s still perfectly useable.  Yes, I’m a skank, but, well, this stuff lasts forever.  Something else that lasts forever is the scent!  8 Hour Cream is the Marmite of skincare, you either love it, or hate it.  I freely admit, I go through phases of both, the scent is an acquired taste (it’s a herbally-linament kind of a thing), and there can be some times where the scent is just too much to bear, so I’d use something else.

So, I was delighted when I heard they were bringing out a “fragrance free” version of 8 Hour Cream! It’s a great multi-purpose balm, less natural, admittedly than some of the other balms you’ve seen on the blog recently, as it has a mineral oil base, but I do find it surprisingly useful, and moisturising, hence having had a tube around (I’ve bought, and used up others, but I like the retro packaging of my original tube!) for the best part of 20 years …

Anyhoo, after using the “fragrance free” version for a while, I think the name is a bit of a cheat.  Whilst the fragrance is very definitely a world away from the original “Marmite” fragrance, it’s very still a fragranced product, just a whisper rather than a shout.  It’s a little sweeter, a little rosier, and very much muted, but it’s still there.  It’s still, seemingly, identical in formulation to the original though, in colour, texture and use, which is a nice change in a reformulation!

I’d recommend this is you’re a fan of the original but have difficulties with the scent, or if you want to try 8 Hour Cream, but have been put off by tales of the scent, but, I must warn you, if you’re expecting something that has no scent whatsoever, then you may be disappointed.