Comparison: Black Sugar by Tom Ford, Sulfurous by Guerlain and Facet by Illamasqua

I was picking out my favourite polishes for autumn, and when I had  made my list, I realised that Black Sugar by Tom Ford, Sulfurous by Guerlain, and Illamasqua’s Facet are quite similar, so I thought a comparison might be in order. 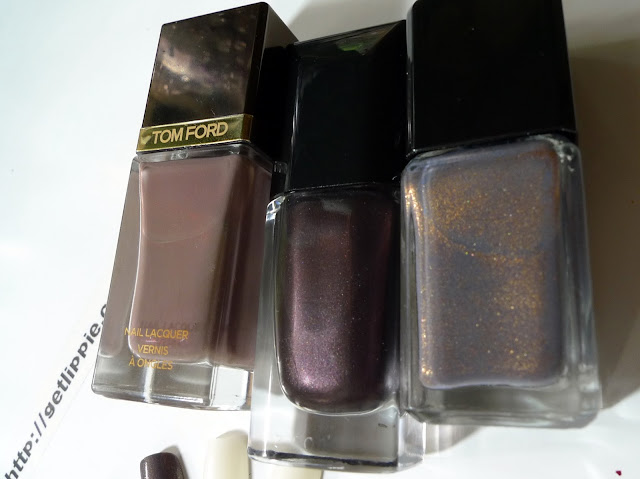 When I got the bottles together, I realised that they were quite different, but possibly not *that* different.

Tom Ford Black Sugar.  This is a browned-taupe, with a quite beautiful red shimmer visible in the bottle which is almost impossible to photograph, in my experience.  Not the end of the world though, as it’s impossible to see on the nail too, as it turns out.
Guerlain’s Sulfurous is more of a shimmering charcoal in comparison to the other two, and is much, much darker than either.
Illamasqua’s Facet is a softened medium dove-grey, enlivened with lots and lots of bronze shimmer. 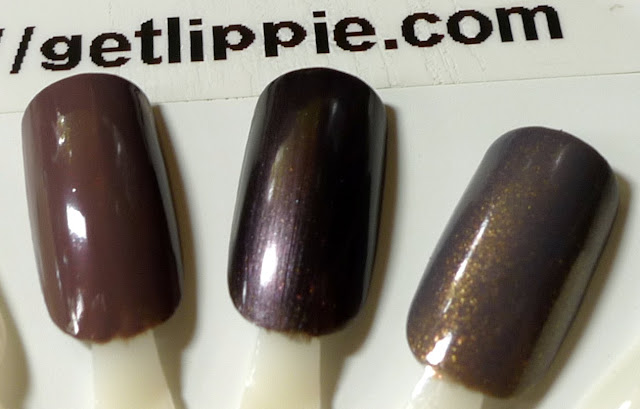 Black Sugar has the thinnest formula and is a little prone to dragging.  This isn’t helped by the super-long brush handle, which is required because of the super-tall bottle.  If you’re a cack-handed muppet like myself, it’s the least easy polish to apply in the bunch.  That said though, the Tom Ford nail polish formula is a good one, and the shades tend to wear very well indeed.  It’s a nice, slightly flat, browned taupe on the nails, a cooler version of Chanel’s Particuliere, in fact, and none the worse for that. It dries a little darker than it appears in the bottle.

I’ve reviewed Guerlain Sulfurous before, and it’s clear I really like the deeply complex shimmering charcoal of it.  I notice in macro-mode, however, that it’s a little brush-strokey, but this isn’t visible in real life.  It has a wide brush which makes application easier.

Facet by Illamasqua is an unusual colour on the nail, being not quite grey, and not quite bronze, whilst appearing also not quite khaki too. Whilst it lacks some of the complexity, and (in my eyes) beauty of Sulfurous, it has its own unique loveliness, which I really like.  The brush is a standard round brush, and the formulation is a little thinner than the Guerlain, but spreads really nicely over the nail.  Illamasqua polishes also tend to be extremely hard wearing. 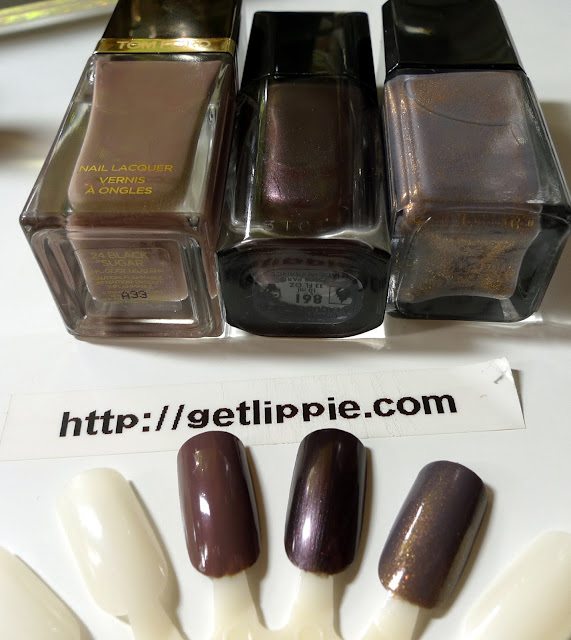 So, all very similar, and all rather different too.  Personally, if I could only have one, it’d be Sulfurous by Guerlain, but the other two are very beautiful too.  Which would be your choice?

This post: Comparison: Black Sugar by Tom Ford, Sulfurous by Guerlain and Facet by Illamasqua originated at: Get Lippie All rights reserved. If you are not reading this post at Get Lippie, then this content has been stolen by a scraper

One thought on “Comparison: Black Sugar by Tom Ford, Sulfurous by Guerlain and Facet by Illamasqua”