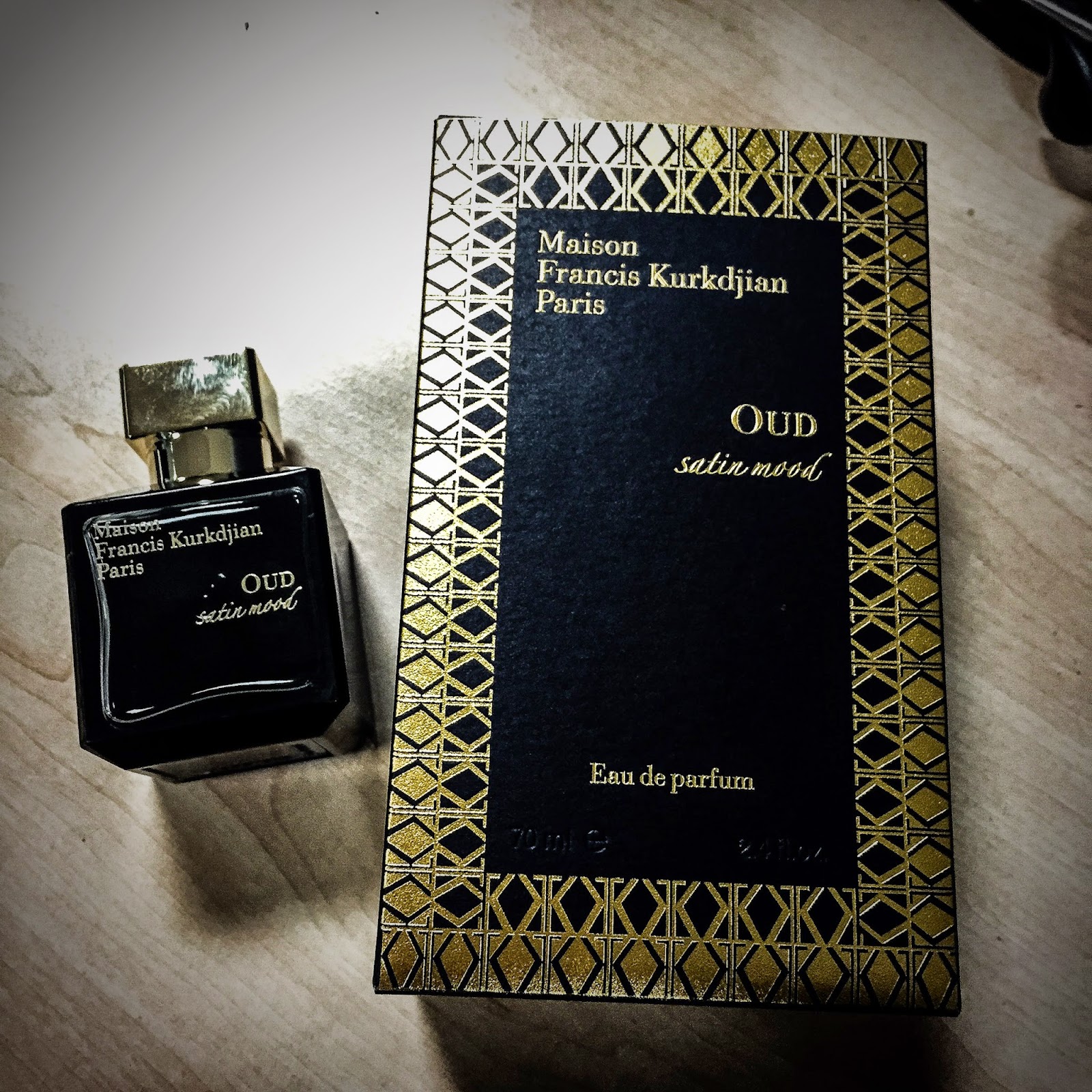 I should probably preface this review with two facts: the first is that Oud Silk Mood by Francis Kurkdjian is one of my all-time favourite fragrances of all-time and this review will potentially be coloured by that, and secondly it must be made known that I am still currently parosmic  and as a result I’m not sure how much use a review written by someone with a distorted/lessened sense of smell will actually be, but I’m jolly well going to write one about this anyway.

Almost two years ago, I wrote a rather prickly review of Oud Silk Mood by Francis Kurkdjian, one in which I loved the fragrance, but had got rather tired of perfume bloggers attitudes towards oud as an ingredient in perfume.  Fast forward to now, and I’m rather over the cynical “We need middle eastern clients! Let’s make an oud!” fad in perfumery myself to be honest, but I still do love an oud when it is well done.

When Francis Kurkdjian released his initial oud fragrance in 2012, there wasn’t an oud fragrance quite like it.  He’d taken a thick, medicinal, traditionally “heavy” (or funky, or gross, depending on your point of view) ingredient, and turned it into a lightly shimmering phosphorescent haze of beauty.  His original Oud was still odd, but it was acceptable, even pretty, and infinitely wearable, even for the oud-phobic.

In 2013, Kurkdjian released the Oud Moods collection, featuring oud fragrances as inspired by fabrics, namely Silk, Cashmere and Velvet.  All showcased oud as the major ingredient, but featured another scent alongside to recreate the sensous feeling of fabrics on skin.  As someone with synaesthesia, which often took the form of textures and fabrics (iris, for example, was grey cashmere) in the past, this collection really appealed to me.  Cashmere and Velvet featured labdanum and cinnamon respectively, and Silk Mood was roses.  Jammy, fruity, lush and deep, deep red roses, which were displayed atop a splintery bed of shimmering, yet still somehow slightly dusty oud.  It’s a perfume I reach for whenever I want to wear roses, but not the roses your grandmothers would wear, and it’s probably in my top five fragrances of all time.

However, since I became parosmic, roses have become a tricky ingredient for me, sometimes smelling burned, sometimes papery, sometimes just flat and unpleasant, and so I have been reaching for Silk Mood less and less recently, as I couldn’t predict on any given day how I’d be able to perceive the smell.  Life with parosmia is often hugely surreal and unpredictable, and so my fragrance choices have been by necessity been more limited over the last twelve months, in order to avoid nausea. However, when I heard that the new addition to the Oud Mood range was going to feature violets alongside the roses, I let out a little whoop of joy, for, after a trip to the Osmotheque in Paris last year, I know that violets are one of the few smells that for me are never distorted, and so I looked forward to smelling Oud Satin Mood very much indeed.

Oud Satin Mood opens with candied violets over a powdery soft vanilla, which is both sweet and floral. Until the rose turns turns up in the midsection it is rather soft and quiet, but the dark roses appear here to add both richness, and more vibrancy to the scent.  Where Oud Silk Mood is jammy and voluptuous, Satin Mood is powdery and ladylike, the soigné Grace Kelly to Silk’s rather blousy Jayne Mansfield.   At the end, which takes a good long while to arrive at, there is a warm and comforting hug of benzoin mixed with the vanilla, which stays close to the skin, but doesn’t get cloying. Throughout wear, there is a shimmer of oud, which adds mystery, alongside both depth and an unexpected gauziness, alongside a certain playfulness to the scent. But the oud itself never overpowers the other ingredients as it does is many other formulas, happily remaining a background player at all times.  It is quieter than Silk Mood, less prone to blooming in the heat, and stays closer to the skin. Even my damaged nose can still pick up the scent 8-10 hours after application, so wear-time is extensive.

Thanks to the roses no longer being central in this iteration of Oud Mood, this, along with the addition of ionones from the violet accord, means that they no longer seem burned or papery to my nose, making this a more pleasurable wear for me than Silk Mood at present.  As an aside: it seems that ionones have the simplest molecular structure of many other perfume ingredients, and so may require fewer functioning receptors available in the nose in order to be able to smell them (this is a theme I’ll be returning to in a later blog post, however), and so even people with a distorted or hugely lessened sense of smell might be able to at least faintly pick up the scent of violets where previously it was thought they couldn’t smell, or distinguish much at all*.

Oud Satin Mood is an eau de parfum rather than an extrait de parfum, and this is reflected in the price, which will be £165 when the fragrance is released on May 1st, rather than the £275 that the rest of the Oud Mood collection sells for. The packaging is also slightly different, a black box rather than the blue of the rest of the range, and the gold fascia on the bottle is no longer there, but it is good news for purses, at least!

I don’t mind admitting that a few happy tears were shed on initially smelling this fragrance. So few things smell “right”, much less beautiful, at the moment that having unexpected access back into the world of both one of my favourite fragrances and one of my favourite perfumers has been a very happy event indeed.  I can no longer smell in as near as much detail as I used to (though things improve almost every day at present), so if this review – my first full fragrance review in almost twelve months – seems thin on descriptions, I can only apologise. In any event Oud Satin Mood is a glorious addition to the Oud Mood collection, however badly your nose might be brain-damaged.

* Info from The Monell Centre in a conversation via Twitter.

This post: Maison Francis Kurkdjian – Oud Satin Mood originated at: Get Lippie All rights reserved. If you are not reading this post at Get Lippie, then this content has been stolen by a scraper