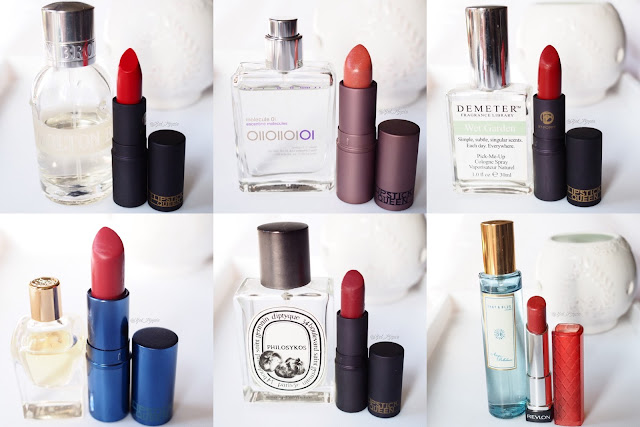 So, I take all my LipsNspritz pictures in one batch on a Saturday afternoon, then wear them throughout the week, taking different pictures of stuff on a daily basis is far too much like hard work for me!  I assure you I do wear them though.  LipsNspritz is my attempt both to wear my entire perfume and lipstick collection, and to help my nose “relearn” perfume whilst I continue my recovery from parosmia.  I’m no longer completely anosmic, merely hyposmic (I estimate that I have around 60% of my sense of smell back now) and I’m leaving my parosmia behind.  It still bothers me, but to a much lesser extent than it used to.  That said, I still struggle with recognising smells out of context, and I still struggle with some smells, though I have recently discovered that coffee no longer smells of sewage (it doesn’t – yet – smell of coffee, however), and that has been a huge breakthrough.

Anyway, on with what I was wearing this week.  The week began with Molton Brown Black Pepper, which is a divinely spicy, prickly, peppery hoot of an aftershave.  Or rather, it was before they reformulated it and called it Black Peppercorn.  It’s still good, but a shadow of it’s funny, unexpectedly sexy former self.  I wore it with Lipstick Queen Red Sinner, which as fine a red lipstick as a red lipstick can be.

I also tried a re-wearing of Escentric Molecules 01,  There’s been a lot written about this one over the years (and if I read one more piece mentioning pheromones, or how it “melds with your personal chemistry to create a bespoke scent for the wearer” piece – ALL perfumes do that – I shall grind my teeth into powdery bloody stumps), and I shall not go on too much, but the “trick” of 01 is that it contains only one scented ingredient; a molecule named Iso E Super.  Iso E Super is a light and airy, slightly sweet and woody scent, and it can be difficult to smell in isolation.  On skin, it smells like clean skin, with a slightly cedary spect, and smells good, without really smelling like a traditional “perfume”, much in the way ambergris-based fragrances smell to my nose.  As it happens, I couldn’t really smell it whilst wearing it, but others could, and they liked it, without being able to say either why, or what it smelled like.  But this matches with my experience of wearing it before anosmia too, so that’s that then.  I wore it with Lipstick Queen Butterfly Ball Lipstick in Smitten, something else which doesn’t draw attention to itself, but makes you more polished just the same.

I love the sour-rhubarb and white flowers of Jour d’Hermes.  The sour fruit of the opening is such a surprise compared to grownup and ladylike white flowers of the middle notes, and I like the opening very much.  Sadly, for my nose, the white flowers are a little too … ladylike and so it’s not a fragrance I reach for very often as a result.  The lipstick was Jean Queen by Lipstick Queen, which is something else I find confusing.  The concept of matching ones lipstick to ones jeans is a bit … superfluous (and my jeans are black, anyway), but it’s a pretty pink-mauve, which doesn’t scream “I AM WEARING JEANS!”, so it will do.

I also wore Diptyque’s Phylosykos this week.   I love this fragrance so very, very much.  It smells of a fig tree in its entirety, from the leaves, to the bark, to the milky fruit, with just a slight hint of coconut oil in the base.  It’s rather wonderful and it reminds me, every time I wear it, of my days off in Cyprus (I used to be a holiday rep over there) where I used to slather myself in Hawaiian Tropic (factor 2!)  and drink cocktails under the fig trees on the beach.  Not only is it the best fig fragrance on the planet, it’s also an instant holiday in a bottle.  Get some.  I wore this with Lipstick Queen Sinner in Wine.  I also like wine. Wine is good.

And finally, Shay and Blue Atropa Belladonna starting with a savoury blackcurrant accord, Atropa Belladonna slides into a waxy and fat jasmine and sandalwood, which is interesting, before ending in a sticky vanilla kiss.  I like this very much (not quite as much as I like their surprising and lovely Salted Caramel, however), and it was a fitting fragrance to spend a Saturday (also in pyjamas) afternoon wearing.  I paired it with Revlon Red Velvet Lip Butter, which should never have been discontinued.

What have you been wearing?

This post: LipsNspritz of the Week 31 January 2016 originated at: Get Lippie All rights reserved. If you are not reading this post at Get Lippie, then this content has been stolen by a scraper