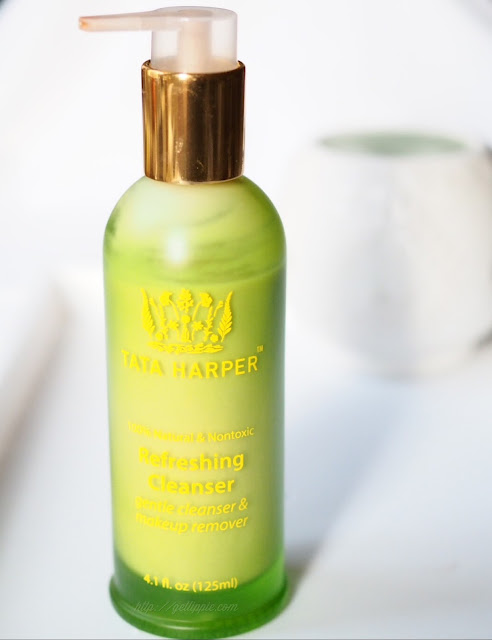 I’m not generally a massive fan of cream cleansers, but this, the Refreshing Cleanser by Tata Harper has slipped in under my radar, and made me its willing slave.

I first tried the Tata Harper range, as so many people did, as a result of the serum which was included in the Caroline Hirons Cult Beauty Box last year (which I mostly bought for a back up of the May Lindstrom Blue Cocoon Balm and the Zelens PHA pads, both of which I already adore, and the whole box cost the same as just those two products, so why not?) and I liked it well enough to want to investigate the rest of the range.  But, and I’ll be honest here, I found the range difficult to navigate, particularly when you’re looking at it from a sensitive-skinned point of view.  As Tata Harper is most definitely a luxury-priced range (the cleanser is £60 at Content Beauty, where I bought this from) these weren’t decisions to go into blindly.

However, I finally decided on the Refreshing Cleanser, as it was the one described as most suitable for sensitive skin, but the description saying it contained salicylic acid, and enzymes to cleanse the skin gave me slight pause (salicylic acid can be drying, and sometimes the fruit acids used to give a chemical peel in some cleansers can cause irritation on my skin), but the formula also contains pink clay and neroli, both of which are soothing, so I pressed buy with some trepidation.

A grapefruit-scented peachy cream, you apply Refreshing Cleanser to dry skin, and massage it in to allow the enzymes to dissolve the dead skin cells, then you remove it with a hot damp cloth as you would with a normal cleanser.  Once removed, you are left with soft, smooth, clean skin.  It definitely delivers on the cleansing side of things, and it also  – I’ve found – provides a gentle exfoliation effect which means that you can effectively stop using acid toners quite so often.   If you have sensitive skin, over-exfoliation can lead to redness and irritation very easily, and I’ve definitely found recently that exfoliating less often (two or three times a week maximum as opposed to every day) definitely leads to happier, less pink, skin.

It’s not great for makeup removal, and I definitely wouldn’t use it around the eyes, but it is a fabulous second cleanse, and I use it as my morning cleanser most days.  You can’t use it for a massage in the same way you can with a balm, or an oil-based cleanser because it’s clay-based and it dries on the skin quite quickly as a result, plus you don’t have the same “slip” you do with a greasier formula.  I find any “rough patches” of skin I have on my face, such as on my forehead or nose, are dealt with just with this cleanser, instead of having to resort to acid toners, which is a good thing for my redness-prone skin.  My skin loves this stuff, it’s tough enough to soften, and gentle enough to do that without irritating.

I’m getting through it rather fast though, and at £60 a bottle, it’s definitely an investment purchase, but it’s the only cleanser I’ve wanted to use since it turned up, which is both a blessing and a curse …

This post: Tata Harper Refreshing Cleanser originated at: Get Lippie All rights reserved. If you are not reading this post at Get Lippie, then this content has been stolen by a scraper