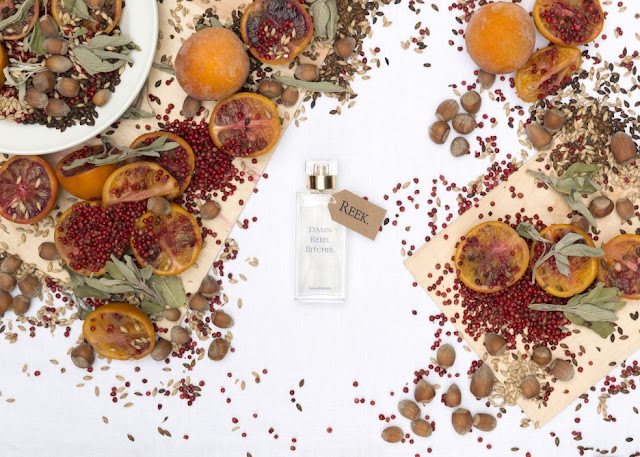 In Edinburgh, at least until the 29th August, Urban Reivers is holding a pop-up shop at 46a George Street, and (yes, I know it’s late notice) I do urge you to pop along if you have any interest in Scotland, Scottish history, or (I almost hate to mention it), Outlander, because Urban Reivers have developed a very interesting fragrance based on Scotland’s rather, um, tempestuous past.

Called Damn Rebel Bitches (inspired by the book by Maggie Craig, which tells tales of the women who took part in the Jacobite uprisings of 1715 and 1745), and created in partnership with Sarah McCartney of 4160 Tuesdays,  the fragrance  utilises ingredients, both rare and everyday, that would have been available to women during the Jacobean era. Combing blood orange and hazelnuts leads to a very creamy citrus effect (if you’ve ever heard of an Orange Julius – it’s the smell of one of those on a hot day) at first, which is compounded by a warm and conforting malty (Ovaltine!) undertone.  The pink pepper  adds a slight prickle of fizziness to the creamy effect, which sounds rather odd, but works very well on the skin, and there is apparently clary sage underpinning the whole thing, but my nose can’t pick that out at all (my problem, rather than the fragrance’s though, to be honest).  It’s really rather lovely, and it’s one of those fragrances that seems familiar, without ever being able to put your finger on what precisely it reminds you of, which is an effect I enjoy. Easy to wear, but not in the slightest bit boring – Mr Lippie is a fan of this one – Damn Rebel Bitches might not be quite as big in effect  as it’s name suggests it will be (it plays far too close to the skin for that), but it’s a gorgeous fragrance all the same.  I’ve used up my sample bottle already, and miss it very much.  If you’re into a little history with your perfume, then you can’t really go wrong with this one.  If you can’t get along to Edinburgh for a sniff, you can buy it from the Urban Reivers online shop, here: https://www.urbanreivers.scot/reek/perfume.html where it will cost you £70 for 50mls.