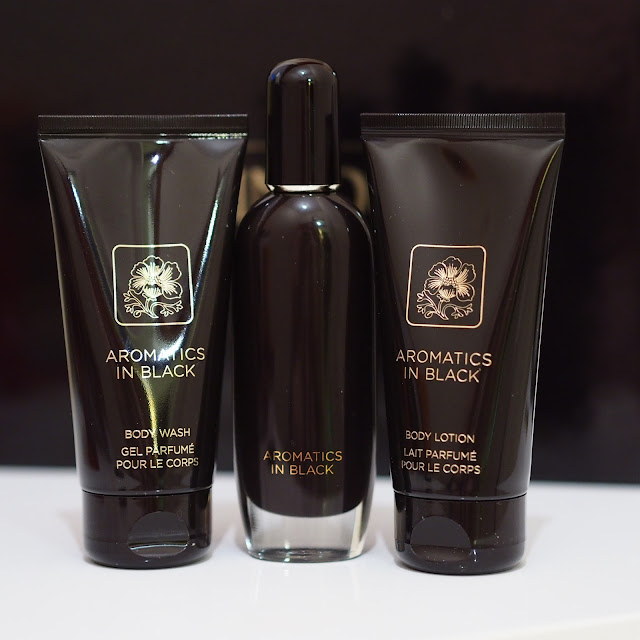 Christmas isn’t Christmas in the Lippie household without an Aromatics gift set of some sort, and so, after discovering that I have enough of the original Aromatics Elixir to last me approximately 400 lifetimes (so around 4 bottles then, including various special editions), this year, I went for an Aromatics in Black box.  Released in 2015 as a “Noir” version of the original, Aromatics in Black boasts plum and grapefruit in the top notes alongside more vetiver in the base.

My nose and I didn’t really get along with Aromatics in Black when it was first released (I suspect it was the grapefruit) as it caused parosmic reactions, but I’m enjoying rediscovering it now.    It’s about as “noir” as playdo frankly, but that doesn’t mean it’s uninteresting.  The addition of plum and grapefruit gives it a more “oriental” feel, without it really turning into a bog-standard “fruitchouli”, but it is very different, both sweeter and lighter than the original Aromatics Elixir, which I love simply because it doesn’t smell like anything else on earth – and it was my signature scent for nearly 20 years, and if that doesn’t tell you how much I love AE, then nothing will – whist still retaining something, albeit a soapier “something” of the fragrance it’s based on.  As flankers go, it’s a good one.  It’ll never replace the original AE, but it’ll do for the days when real AE is simply too much effort.

It’s a little odd that they’ve made a “noir” version of something that’s already the “noir-iest” fragrance on earth, if you ask me, but there you go.  The very best thing about Clinique gift sets is the price, you get the 50ml fragrance, the body wash and lotion and gift box for the exact same price of the 50nl fragrance alone, which in this case is £56.  Not at all bad.

This post: Clinique Aromatics in Black Essentials Gift Set originated at: Get Lippie All rights reserved. If you are not reading this post at Get Lippie, then this content has been stolen by a scraper