A couple of weeks ago, I was one of the lucky winners of a competition run by the lovely people at Organic Surge.  The prize was a girly night out at an exclusive screening of Sex and the City, and, alongside plying us with wine and popcorn, we also all received a goody bag filled with their range of skincare treats.

I had a great time, it was lovely to meet some of the people behind the brand, and chat to them about how excited and positive they are about the company and what they’re trying to do.  The competition was to celebrate Organic Surge’s nationwide launch at Boots, which they’re very happy about, rather unsurprisingly!   Founder Alan McKenzie told us that it was his dream to produce a range of ethical skincare products untouched by “harmful” chemicals at an affordable price, and that for every product sold a proportion of the proceeds are used to support the Kenya Children’s Home and Watoto charities.

What really interested me was that this is a budget range, and yet every product is free of

All of which is more than good enough for me to introduce them as my first review for my Organic Wednesday review!  And yes, I know it’s not Wednesday, but there have been some refurbishment issues here at Lippie HQ … 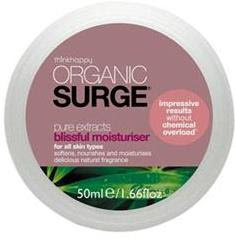 In my goody bag, I received (full size!) samples of their Eye Gel and Daily Cleansing Wash alongside a jar of their Blissful Daily Moisturiser for Normal skin, which is what I’ll be reviewing today.

For what is basically a cheaper brand, the packing of all their products is surprisingly sturdy, the moisturiser comes in a decent size glass jar, which was a pleasant surprise.  Once you open it up, you’re greeted with the cheery and uplifting smells of rosemary and lemon oils which is a nice way to start your day.

The cream, in the pot, appears thick and rich, but on application it’s actually pleasantly light and is very easily absorbed (in my case, possibly a little too easily absorbed, about which more later).  It disappears readily into the skin, and doesn’t leave an oily residue, which is nice.  I also found it had a slight mattifying effect on my skin which I think will be welcomed by some oilier skinned people.  The scent doesn’t linger too long after application, which is good, there’s not a lot worse than being able to smell your skin care products all day.

It’s cheap (currently £7.99 at Boots), does what it says it will, and smells lovely.  As a basic moisturiser, albeit one without SPF, it’s a very nice one.  I have quite dry and sensitive skin, so I found that it wasn’t quite moisturising enough for me, but I’d very happily buy the Super-Intensive Daily Moisturiser version of it instead.  I’ve been using it now for three weeks, and haven’t had any issues with sensitivity or spots, so I’m sold!