So, here is part two of my eye makeup remover challenge!  Last week, in the cheap and cheerful round, I tried Boots Botanics and Amie makeup removers, and Amie won. This week, I’ll be testing Talika and Chanel (my own personal favourite!) make up removers against one another.  Whichever one wins this round will challenge Amie cleanser next week, and be declared the champion of champions …

(as an addendum to last week’s challenge, I’ve had two independent adjudicators also test Amie, and there was NO stinging in either case, it really is just my horrendously sensitive eyes that it appears to affect.) 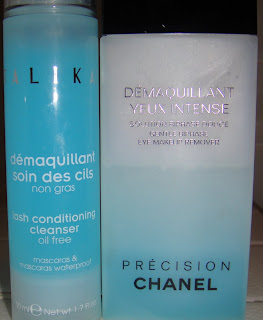 Here we have Talika lash conditioning cleaner (which I got free in a SpaceNK goody bag), and my personal bottle of Chanel BiPhase eye make up remover.  Once again, we have an oil-free formulation (the Talika) and an oil based one – the Chanel.  At this point I’m wondering why all eye makeup removers have to be blue?  A lot of them use cornflower extract, I’m almost certain that won’t make things blue, but I digress somewhat.

Talika claims theirs is the first oil-free formulation to work on waterproof mascara, and says it strengthens and lengthens lashes, I’m only testing the first of those claims, but I’m intrigued by the second!

Chanel claim: that it “Removes makeup perfectly from the lashes and the eye contour, leaving the skin soft and supple. Combines effective makeup removal with respect for the delicate eye area.” I’m on about my fourth bottle of this stuff, and I love it. 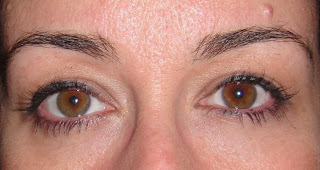 Again, three shades of shadow – over a primer – and mascara.

First thoughts: Neither product has a particular scent, once on the cotton wool, but the Talika is actually gel that you have to pump (quite hard!) to get out of the airtight tube.  Here’s the cotton wool after 30 seconds on the eye: 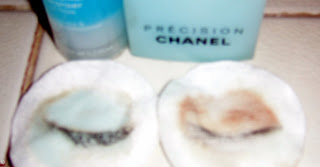 No idea what happened to the focus here, sorry!

As you can see, the Talika has got to work straight away on the mascara, but the Chanel has removed more of the eyeshadow.  Here’s how my eyes looked at this stage:

Yes, definitely the Talika is ahead here. Round one to Talika.

I then continued and removed the rest of my eye makeup with the pads, here’s the guck shot: 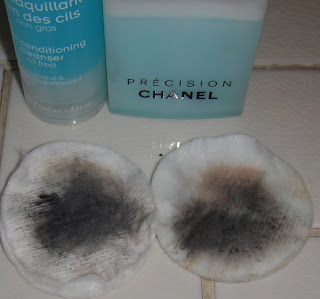 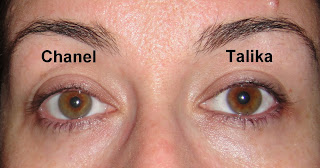 Results-wise, the products are neck and neck here, it looks like they’ve both cleaned the eye-area well, but I’ve noticed that the Talika has left the eye area feeling a little tack-y to the touch, and slightly more taut than the Chanel.  There is no stinging from either.

Round Three: (yes, I’ve added an extra round this week, as the results were too close to call!)

After what happened last week when I had the shower, I decided to try and replicate that situation. First, I steamed my face a little, then – as that seemed to have no effect – I splashed my face with a little warm water: 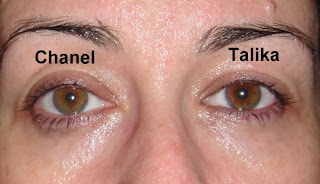 Again, not a lot has happened here, there’s a tiny bit of smudging on my right eye, but nothing like as dramatic as last time!  Then, I decided to bring  out the big guns. Cleansing oil.  And this is what happened:

The Chanel has a very definite smudge of mascara!  I’m devastated. Seriously!  I’ve been recommending it as the best eye makeup remover for as long as I’ve been using it!  Coco, how could you?

Next week, Amie Vs Talika  an all oil-free remover final.  I’m deeply surprised!