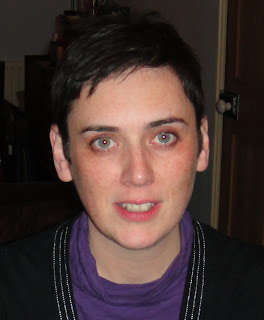 Donna has the most lovely eyes, but she told me that she’s got out of the habit of wearing shadow recently, and was looking to learn how to apply dramatic “winged” eyeliner.  When Donna does apply colour to her eyes she uses a lot of teals and purples, but we discussed something a bit different and decided that orange was the way forward!  I broke out my pro palette and got to work:

As always, we start with the base.  Donna has great skin, with some lovely freckling, so we just used a tiny sweep of Lily Lilo powder foundation as a base and left it at that: 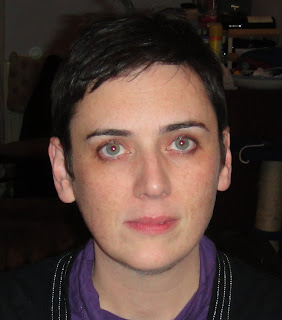 Then we got to work on Donna’s eyes.  I used this palette: 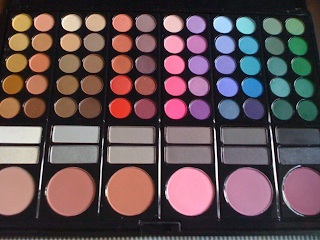 Mainly concentrating on the second row from the left there, I used the second and third shades down as a colour wash all over the eyelid area, using the slightly darker shade as a contour in the crease:

The peachy-orange really brings out the green shades in Donna’s eyes, yet it’s not too in-your-face.  However, I’m disappointed with the quality of the shadows themselves, the colour pay-off is pretty poor, and even attempting to foil with them doesn’t improve it very much at all.  I was hoping for a much more dramatic look.  Still, the colour wash is pretty, and works well enough, just not quite well enough.

Then, onto the liner.  For this, I used Urban Decay’s liquid liner in Roach, which is one of my favourite shades of all time, it’s a gorgeous burgundy-brown shade that’s flattering on almost everyone, as it’s less harsh than black.  For a really dramatic look, I always draw the liner in a tiny right angled triangle shape right next to the lashline: 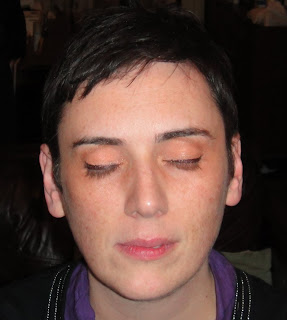 I start by drawing the upright at the outside corner of the eye, then draw a line from the inner corner to the top of the line, then fill in the triangle with the coloured liner.  It’s a lot more simple than this sounds, and I’ll bring you a step by step guide to how to do this soon. 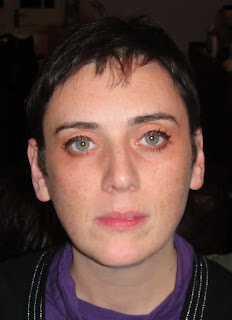 Here’s how the eyes looked when I was finished, we used two coats of mascara, and I think this is a great dramatic look.  Yes, it could have been a bit more dramatic, but overall I like this look.  Then I made a mistake, attempting to make up for the lack of drama in the orange eyeshadow, I thought a bright orange lipstick would be in order.  All I did then, was gild the lily: 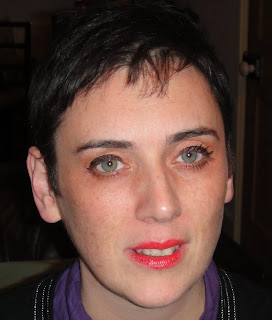 Actually, the lipstick itself is a great shade for Donna (it’s a Stila one, I’ve forgotten the name of, but I’ll find out), it’s just too much with the winged liner. We toned it down later with a more neutral lip, and it looked much more in balance.

Thank you, Donna!  I’ll not gild the lily next time, I promise.