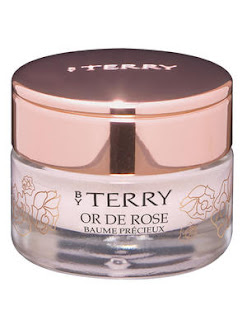 Oh, this looked like a little pot of gorgeous in the store: 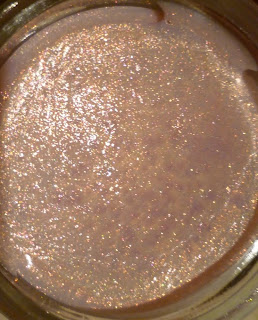 It smells delicious, looks pretty, and makes all kinds of wonderful claims on the packaging, so I bought it.  Oh, when will I learn?  This is the limited edition version of the fast-becoming-a-cult product By Terry Baume de Rose, which, according to Space NK (yes, them again) is a “Rejuvenating, reparative, strengthening, nourishing and anti-ageing” wonder product that works on lips, cuticles and, well, practically anywhere else you want to put it.  So, a bit like 8 Hour Cream then, only without that gross “liniment” smell that can sometimes be so off-putting.

I got some SpaceNK vouchers just before Christmas, and I splurged on a pot.  This costs £45!  Now, I’m no stranger to expensive lip balms (my Holy Grail lipbalm remains Sisley Nutritiv, and that’s £33 a pop!), but this shocked even me.  I guess it’s because that lovely sparkly effect you can see in the second picture there is made by lots of flakes of pure 24k rose gold.  But … even so.

And actually, it’s those rose-gold flakes that make this product a bit of a duffer, if you ask me.  Now, the thing I like about pot-balms (as opposed to sticks) is that they tend to be more versatile, meaning you can use them in places you wouldn’t dream of putting more traditional balms.  I use 8hr cream (and my Badger Balms) like some people use Vaseline. I stick it on scrapes, cuts, burns, zits, cuticles, in my hair, around my eyes, and on the odd occasion, I’ve even been known to use it as a lip product.  But this stuff is GLITTERY.  Really, very GLITTERY. And that glitter gets EVERYWHERE.  And it’s scratchy glitter too.  Urgh.

Don’t get me wrong, as a lip product it’s … well, it’s okay. It’s not as moisturising as some other balms (Sisley, Badger Balm, and 8 Hour Cream all knock it into a cocked hat for that), but it’s not a dreadful one either.  It is better than many Nivea or Blistex products, for example.  But my problem is that damn glitter!  You can’t use the balm on your cuticles unless you want to shed glitter onto any porous material you come into contact throughout the day, and you can’t put it anywhere on your face – except your lips – unless you want to look like you like you let a 3yr old with ADHD and a Barbie obsession put on your makeup.  Apparently, the balm (sorry, baume) is meant to give you a sheeny glow, but glitter is not glow, and I wish cosmetic firms would stop mistaking the two.  It’s a shame really, as I own a couple of By Terry products, mainly eyeshadows, and they’re very good.

It does, however, make an excellent base for lipstick, but at £45 a pop, I won’t be re-purchasing.  Ever.

8 thoughts on “Review – By Terry Or De Rose Baume”