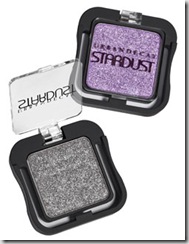 I was sent these little lovelies last week by Urban Decay, and I’m delighted to bring you some swatches as I’ve not been able to find any more details about them in the UK!
They’re the latest in sparkly eyeshadows, here’s what Urban Decay says about them:
“An explosion of stars. Stardust shadows’ silky texture delivers an incredible amount of sophisticated, twinkling sparkle. Boasting 40% more glitter than our most sparkly shadows, Stardust delivers a sheer wash of color, topped with teeny bits of iridescent sparkle that glisten like wet snow.”
I received the shades 54 and Moon Spoon (and how I wish it were called Button Moon!) which are a lovely light lavender-purple and an iridescent grey, respectively. 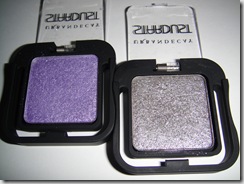 I love the squeezy rubber packaging, they’re great fun to use, and they do indeed sparkle and twinkle in the package. Urban Decay say you will get no fall out with these, so I put them to the test, but first off, here are some hand-swatches:

First things first, Urban Decay aren’t kidding when they say these are sheer!  I’ve swatched these over Urban Decay Primer Potion here (there’s a dot of UDPP in the centre of these swatches, and the shadow has been swatched in a much larger circle around them), you can see there’s a hint of purple on the 54 swatch, but you can barely pick up the colour of the Moon Spoon at all.  Here’s a swatch from a different angle: 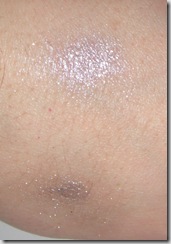 These are very shimmery, and very lovely. They’re not gritty (surprisingly non-gritty, in fact!) and the fact that they’re so sheer actually makes them a lot more versatile than they would be if they were more highly pigmented. I’ve not experienced much fall out, and they’re very definitely NOT chunky glitter.  Here’s a look I created – and wore to the office! – recently with Moon Spoon: 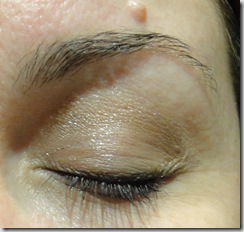 Apologies for the slight creasing there, this was taken after I’d  been wearing it for around 14 hours.  This is a base of the two lightest colours of my Chanel Kaska Beige quad, (with a Kat von D King Cobra liner, more about that later this week!), and with some of the Moon Spoon pressed over the top.  It just gave me a gorgeously glossy shadow look without being too OTT for day wear.
These shadows really come alive under artificial light though, and I’ll bring you some more looks with them when I’ve had a chance to see how they work foiled.
Urban Decay Stardust shadows are available in 9 colours (including white and black) and will be available from Boots and Debenhams stockists very soon, will you be picking any up?