Well, it’s been a while since he popped up, and I did embarrass him this week by outing his new-found love of candles, so I thought it was time he reviewed something else. Today’s post is by my fluffy wuffy bunnykins Mr Lippie.  Please say hello: 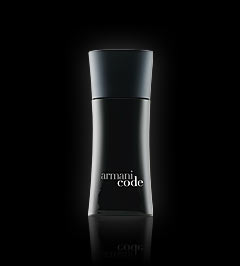 I’m not a big wearer of scents, I think we’ve established that. If you didn’t know it from yesterday’s post (rolleyes) you certainly know now. However, somehow, I seem to have been landed with a quite nifty bottle of Armani Code, and after the first experimental sniff a couple of weeks ago, I thought I could potentially give it a whirl.

Firstly, a brief look at the packaging – the bottle itself. A very sleek black bottle that curves outwards gently at the base and top, with the brand name fairly discreetly at the base of the bottle. Nice. One minor bit of criticism – the lid, whilst going for the gunmetal grey look, is still, noticeably, plastic. I admit, you don’t want to spend lots on a piece of kit that is no doubt going to get dropped, scraped, possibly lost, etc, etc, etc…but it just jars a bit with the look of the rest of the bottle. Still, nevermind, onto the scent itself!

It’s….intriguing. And that’s not a cop-out, I assure you. It’s fresh…but there’s a hint of something behind it. The scent, is, I would say, very definitely masculine – not aggressively so, but more subtle. Not quite an old-school James Bond smooth scent, but definitely several leagues above the occasional nasal assaults you find emanating from salesmen. I’d normally say used car salesmen, but, to be fair, the teenage wunderkids you find in mobile phone shops tend to pile it on with little or no regard to whether the customer has an interest in staying concious during the sales pitch. Where was I? Ah yes, the scent. Smelling this puts me in mind of a cocktail bar – not one with a dress code or something, or anything horribly 80s-tastic, but somewhere comfortable, relatively unselfconcious, and with enough presence of mind to keep things low-key and chilled. I like it, basically.

It lasts quite well – I would say a whole morning – and there’s still hints of it there, which isn’t unpleasant. I’m not sure how much this will retail at, but it looks like it’ll last a good 2/3 months, so I would say it’s probably a reasonable choice for a gift/impulse buy/attempt to make your boyfriend smell nice/general hint to change his ways…I’ll be using it for awhile yet, so I’m sure GetLippie won’t have too many objections!

And finally, because I said I would, the summary:

Less whale bottom, more chilled cocktail bar. And if that doesn’t make you like it, what will? 😉

So there you go.  Armani Code is available from all good perfumeries (trans: department stores) and costs around £43.

The Small Print: Samples were sent for review. But actually, I take no responsibility for the content of this post anyway, as MrL won’t wear the stuff when I’m near him.  I suspect he’s worried about me trying to re-enact the Denim adverts. That or he drank it.